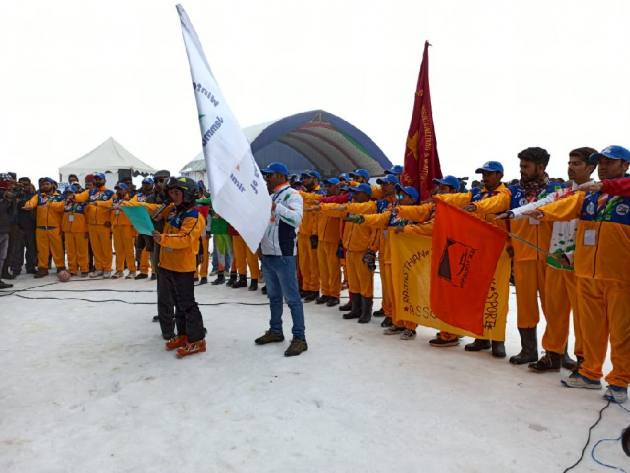 Despite calls from different quarters to cancel the first winter games chapter of Khelo India, the government decided to go ahead with the event at Gulmarg in Jammu and Kashmir on Saturday amid the coronavirus scare.

Union Sports Minister Kiren Rijiju launched the event on Saturday which will continue till Wednesday. Around 800-900 sportspersons will participate in the event at the ski-resort in Gulmarg in north Kashmir's Baramulla district.

J&K government spokesman Rohit Kansal said there was no need to worry about the games as 100 per cent testing and screening is being conducted. However, it is widely perceived in the Valley that the government wants to project situation in Kashmir as normal through these games.

Wuhan To Kochi: An Indian Medical Student's Great Escape From Epicentre Of Coronavirus

From Critical Drugs To Auto Parts, Zips To Solar Panels, How Coronavirus Has Hit Supply Chain

Health officials in Srinagar refused to comment about the games saying they don’t have a mandate to talk about it. According to government sources, 230 people from Jammu and Kashmir with travel history to countries with high prevalence of COVID-19 have been screened. Many test reports have been received and none of them have tested positive in the Kashmir region so far. Five people are kept in isolation at SKIMS Soura in Srinagar whose test reports are still awaited.

Test reports of two suspected patients from Jammu have been received. “Both are high viral load cases. There is a high probability of testing positive,” Kansal said. The patients were brought back to the Government Medical College in Jammu by the health authorities with help of police after they fled from the hospital. They had travelled to Italy and South Korea earlier.

The J&K administration has ordered all primary schools in Jammu and Samba districts to be closed till March 31. Biometric attendance has also been suspended for the time being.

The government is worried about nearly 1200 pilgrims, who are in Iran and mostly from the Ladakh region. Government sources say a large number people from Kashmir are also in Iran.

“People coming from Iran is an issue. They should cooperate with us. They must go for quarantine. The government is also prepared to deal with it,” says Shafkat Khan, Nodal Officer, dealing with Coronavirus in Jammu and Kashmir.

“This is a time of crisis all around the world. Major tournaments and games have been postponed globally. But in Kashmir, it is the opposite. We fail to understand why the government wants to go ahead with Winter games in Gulmarg. All will be huddled in a small place with snow and cold temperature everywhere and imagine what will happen if anybody has any symptoms of this viral disease,” said Private Schools Association of Jammu and Kashmir (PSAJK) president G N Var.

He called on all private schools to take all necessary precautions and preventive measures in the wake of the coronavirus epidemic around the world. The association said that schools have been asked to ensure that all protocols are followed to prevent any spread of such disease in Jammu and Kashmir.

“This region has remained immune to the deadly disease but that shouldn’t make us any complacent. We have asked schools to take all possible measures and also use this coronavirus scare to educate students to understand the importance of cleanliness,” Var said.

Dr. Shaikh Ghulam Rasool, Chair of J&K RTI Movement, said amid the Coronavirus outbreak, the whole world is on high alert and is taking precautionary measures including cancelling all small and big events to check the spread of the epidemic. “Having an event like Khelo India Winter Games-2020 in Gulmarg, Kashmir between 7-11 March 2020 is highly irresponsible. The event has created hysteria among the masses, and if such gatherings add to the number of infected, the government should completely be held responsible,” he added.

Srinagar Mayor Junaid Mattu had earlier called for the cancellation of the event. "In view of the #COVID2019 situation, I personally believe the 'Khelo India' sports event in Gulmarg should be cancelled," Mattu tweeted on Friday evening. "I have conveyed this to the administration as well as the Lieutenant Governor of J&K, Sh. G. C. Murmu. Precautions are vital."

"At a time when Coronovirus (sic) has caused a global health crisis & EU - India summit deferred, J&K admin is organising a massive sports event in Gulmarg. Why should Kashmiris bear a staggering cost for showcasing 'normalcy'?" Iltija, who uses her mother's verified Twitter handle, said.

A number of events related to Holi and Women's Day celebrations were cancelled while the UGC asked universities to avoid large gatherings as precautionary measures against coronavirus, as a man from Delhi tested positive on Friday, the 31st such case in the country.

The mayor also said that the weekly flea market, locally called as 'Sunday Market', should also not be allowed this weekend.

In view of the #COVID2019 situation, I personally believe the ‘Khelo India’ sports event in Gulmarg should be cancelled. I have conveyed this to the administration as well as the Lieutenant Governor of J&K, Sh. G. C. Murmu. Precautions are vital.

"I'm also of the FIRM opinion that we should not allow the Sunday Flea Market in Srinagar this weekend (for the nature of the weather, the source countries where the bulk merchandise is imported from AND the number of people who visit the market). Have conveyed this as well," Mattu posted on Twitter.

He said common sense dictates that all congregations, including religious ones, should be avoided.

"If KSA (kingdom of Saudi Arabia) could stop Umrah visas and shut the Holy Kaaba for deep-cleaning/sterilization - how is disallowing Friday prayers controversial?" Mattu asked.