Kolkata Malls Use UV Rays To Sanitise Elevators, Handrails Ahead Of Festivities

COVID-19 Protocols: 'Around 25 washbasins have been installed outside the mall and no one is allowed to enter the premises without a mask,' says Acropolis mall owner. 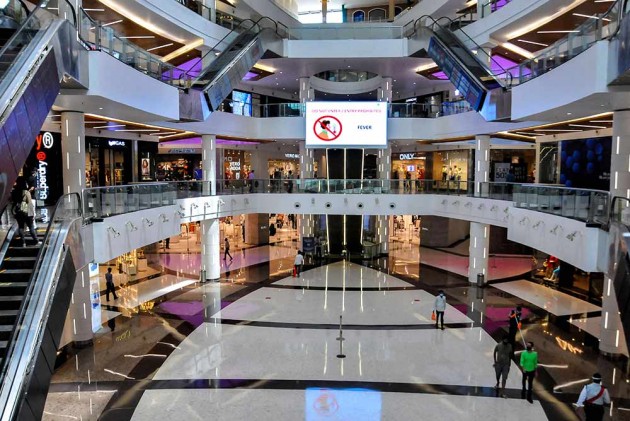 With rising footfalls in the run-up to the Durga Puja festival, the authorities of shopping malls in the city are taking all health safety measures, including the use of ultraviolet rays to sanitise elevators and handrails, in the wake of the COVID-19 pandemic, officials said on Wednesday.

They also felt that strict adherence to safety guidelines has helped them attract visitors.

Leading shopping malls such as Acropolis, South City and Quest are currently experiencing a surge in footfalls ahead of Durga puja and expecting that number of visitors will further rise with multiplexes reopening from Thursday.

"We are careful about safety protocols since the reopening of our mall and diligently following all the guidelines. We will allow people up to 50 per cent of our standard capacity of around 50,000," Acropolis head K Vijayan told PTI.

Around 25 washbasins have been installed outside the mall and no one is allowed to enter the premises without a mask, he said.

"Strict vigil on enforcement of the guidelines helped us attract people. Around 3,500 permanent and outsourced employees also remain safe. No one among our staffers has been detected with the disease till now," Vijayan said.

South City mall has witnessed a 20-30 per cent jump in footfall in recent weeks and is also concentrating on the frequent sanitisation of common touchpoints, an official said.

The shopping destination in the southern part of the city recorded over 40,000 footfalls on Sunday.

"We are not much concerned about the crowd with around 30 per cent footfall. It may go up to 50 per cent as the festive days near," he said.

With increasing retail sales, the mall authorities are witnessing higher conversion rate, the percentage of people that walk in and make a purchase, as compared to that of last year.

Compared to the pre-puja period in 2019, sales at food courts were up by 25 per cent this year, Bagree said.

According to them, festival advances to government employees and puja bonus to many private entities will further boost consumer spending.