More than 100 mm rain was recorded at different places in the city from 1 am to 7 am of Monday, submerging many important thoroughfares and low-lying areas under knee-deep water. 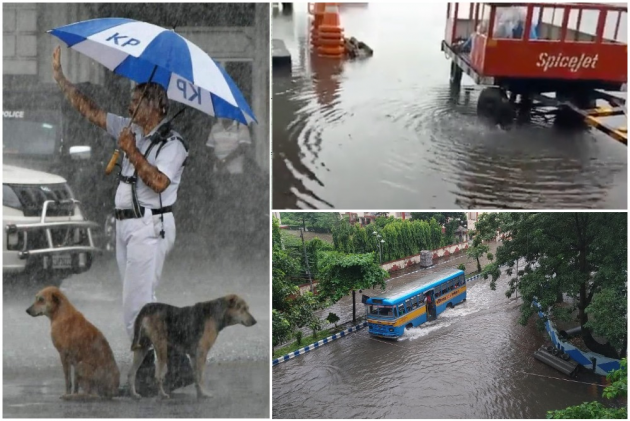 Waterlogged streets. Flooded gardens and homes. Boats floating in the city. These were the scenes from Kolkata, the capital of West Bengal, on Monday after torrential rains lashed the city and neighbouring districts since the early hours of the day. The heavy rain has thrown normal life out of gear in the city with the Met predicting more downpour for at least another day.

More than 100 mm rain was recorded at different places in the city from 1 am to 7 am, submerging many important thoroughfares and low-lying areas under knee-deep water.

The drainage pumping stations of Kolkata Municipal Corporation recorded 136 mm rain at Dhapa, 115 mm at Kalighat and 109 mm at Ballygunge, an official said.

Cyclone Yaas: Storm Surges Wreak Havoc In Coastal Bengal, Danger Not Over Yet

Sundari Trees In Sundarban Delta Are Dying A Slow Death. Is Anyone Listening?

The Met department has forecast more heavy rain or thunderstorms till Tuesday morning in most districts of south Bengal, including in Kolkata.

Social media was flooded with images of the chaos caused by rain across the city.

If the rain doesn't stop #Kolkata will come to a standstill. Most of the city is under water. Can't imagine how bad it is in other in the other districts. #KolkataRains pic.twitter.com/QpvuNDtVEp

Water logged UDITA . Since we are playing water logged #kolkata .
This is torrential rain ans hasn't stopped yet. https://t.co/eeJTSnAVi8 pic.twitter.com/3RQCg17cav

Come rain or shine, life much like the show, must go on.#kolkatarainðÂÂÂÂÂÂÂÂÂ pic.twitter.com/o6D7nQN4UA

Many wondered when the non-stop rain was going to let up. Others questioned the drainage infrastructure of the city, wondering how one night of rain could lead to such a condition.

A night of rains , same story. This waterlogging will ease after approx 24-30 hours. Surprisingly situation has markedly worsened after inauguration of a pumping station to ease this exact problem @GolfGardens. Who will question the executing authority? @kmc_kolkata @FirhadHakim pic.twitter.com/48CfB2DHzK

Waterlogging inside the Kolkata airport after overnight heavy rains. However, flight operations are not affected. Arrival and departure of flights reported to be normal. pic.twitter.com/2xSW3Oql22

Authorities blames movement of cyclonic circulation for the heavy rains. The city has seen unabating downpour in various parts across the weekend.

As per the Met department figures for 24 hours till 8.30 am on Monday, Kolkata received the highest rainfall in West Bengal at 142 mm.

The other places which recorded heavy precipitation during the 24-hour period are Canning (113 mm) in South 24 Parganas, Salt Lake (112.8 mm) and Dum Dum (95 mm) in the northern outskirts of Kolkata, as per the Met department data.

There were fewer vehicles on the streets since morning, but traffic snarls were caused owing to very slow movement because of submerged thoroughfares.

People trying to go to work had a tough time getting public transport as the strength of public buses and taxis was much depleted owing to the torrential rains.