While 'green' foods usually signify vegetarian or vegan foods, there was nothing traditionally 'green' about this biryani, which was cooked with mutton to celebrate the TMC's KMC win. 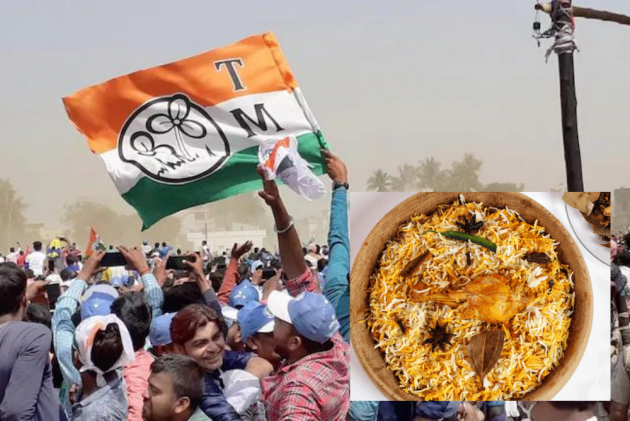 The 'City of Joy' Kolkata was wrapped in mirth and festivities on Tuesday after Mamata Banerjee’s Trinamool Congress (TMC) pulled off a thumping victory in the Kolkata Municipal Corporation (KMC). The party bagged 134 out of 144 seats and 72 per cent of vote share in the civic body polls, beating for BJP and Left parties with a wide margin. Following news of the victory, supporters of TMC broke out in celebration across the capital. And once again, the state which is known for coming up with innovative food items to reflect the political mood of the people did not fail to surprise. While green 'aabir' (dry powder colour) after a TMC victory is common, this time some in Kolkata celebrated Didi's win with "green biriyani".

While "green" foods usually signify vegetarian or vegan foods, there was nothing traditionally "green" about this biryani, which was cooked with mutton. The green colour was the result of green food colouring.

The innovative biryani was cooked up by a restaurant owner in Shyambazar, Kolkata who reportedly sold plates and plates of it on Tuesday after the results of the elections were announced. According to a report in News18, the restaurant owner is a long-time TMC worker. The green colouring of the biryani was achieved using food colouring and coriander paste.

Btw,this is the scene at Kalighat in #Kolkata close to the residence of #MamataBanerjee as #TMC workers erupt in euphoria over #KolkataMunicipalElection2021 results and trends. Don’t ignore the song that supporters are dancing to.If you are from Bengal then you know who it is for pic.twitter.com/giL0xevoau

Even as images of the green rice dish went viral on social media, this is not the first time that politics has flavoured food in West Bengal. During the state assembly election in West Bengal earlier in the year, several name-brand sweet shops were selling 'Khela Hobe' sweets in support of TMC. 'Sandesh' with lotuses for BJP, CPI(M)'s 'Kaaste Haatur' (sickle and hammer) and TMC's 'Jora Ghash Phul' have also been a popular choice during elections in the past few years. In fact, this year, sweet shops outdid themselves by crafting faces of Banerjee and Prime Minister Narendra Modi on sweets.

While the "green biryani" was meant as a token of celebration, the succulent rice dish that is a staple favourite among Bengalis (as well as others) was in the eye of controversy just a few days ahead of the KMC elections when the TMC accused the BJP of luring prospective voters with plates of biryani.

In an incident that was reported by Hindustan Times from the Maniktala area in the city, TMC claimed that the saffron party had made large cooking arrangements to prepare biryani on top of a private hospital ahead of the polls on Sunday and were promising voters free food if they voted for them. The reports were denied by the hospital administration, however, who claimed that he boryani was being cooked for patients in the hospital.