Tourists and travellers have been asked not to venture towards the Kunzum Pass in Himachal Pradesh with snowfall being reported in several parts of the state including Rohtang Pass. 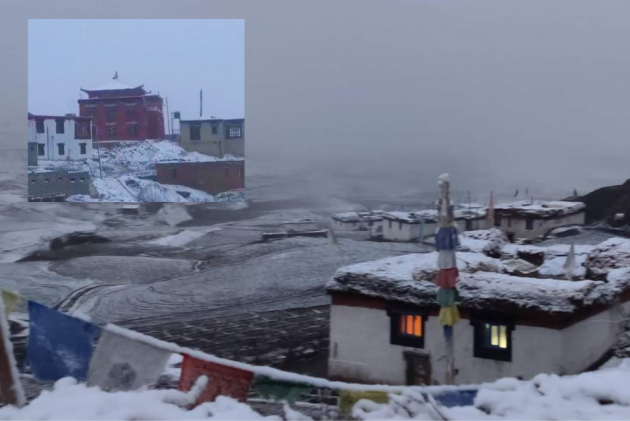 The world’s highest motorable village, Komic, situated at an altitude of 15,500 feet in Spiti Valley in the Lahaul and Spiti district of Himachal Pradesh, has experienced the season’s first snowfall, signalling the beginning of the winter in the state.

Snowfall was also reported at Rohtang Pass and high-altitude areas of the district, bringing cheer to tourists visiting Manali and Lahaul-Spiti.

The Lahaul-Spiti administration was, however, quick to issue an alert to tourists, all travellers and locals, asking them not to venture towards Kunzum Pass, a 14,931 feet high mountain pass that connects Lahaul and Spiti.

Monks at the Komic monastery shared video footage of the first snowfall on social media—it showed a panoramic view of the Komic lake area and other settlements wrapped in fresh snow.
Komic, which also boasts of the world’s highest post office, shot into fame recently when its entire adult population was vaccinated as part of the state health department’s drive.

Elsewhere in Himachal Pradesh, where the Met department issued an alert about the possibility of rain and snow, many areas saw a significant drop in temperature of up to 8 degrees Centigrade in the past 24 hours. The temperature was 4 degrees below normal, said a Met department official.

While Solan recorded 13 mm of rain during the day, the Kullu administration stopped the movement of tourists towards the Rohtang Pass. Traffic through the Rohtang Tunnel was operational till late evening.

Deputy Commissioner of Lahaul-Spiti, Neeraj Kumar, said all arrangements have been made to maintain the supply of essential goods to high-altitude areas during winter. Since the district will also witness polling on October 30 as being part of the Mandi parliamentary constituency bypoll, contingency plans are in place in the event of inclement weather.

The district had witnessed landslides and flash floods during the monsoon, causing massive losses. However, the opening of the Rohtang Tunnel in October 2020 has been a lifeline, enabling people and emergency vehicles to ply.