The wreckage of the cockpit of the crashed Air India Express plane suggests that after the pilots landed on the runway in Calicut, they had attempted to take off again, perhaps realising they might not be able to stop the plane. 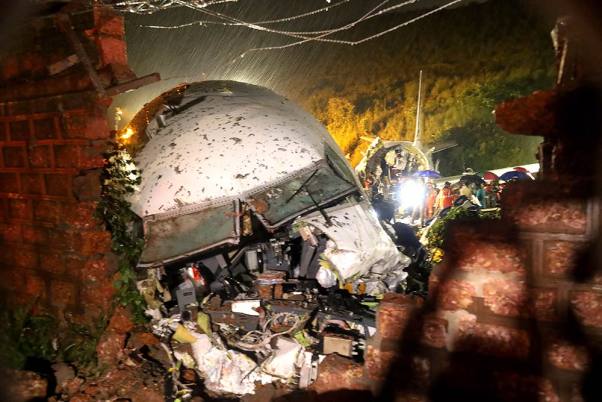 Videos and photographs of the cockpit wreckage of Air India Express aircraft, that crashed at the Calicut International Airport in Kozhikode on August 7, suggest that the two pilots tried to take off after touching down.

A video has emerged from the crash site in which two aviation personnel are talking to each other about how TR (thrust reversal) has not been deployed and throttle position is at maximum.

Aviation experts say that the thrust reversal is applied along with brakes for additional reverse air pressure to bring the plane to a halt.

“Similarly, throttle in maximum position means full accelerator to gain the maximum speed. As we push the accelerator in our cars for faster movement, the throttle does a similar function in the aircraft. This throttle position indicates a takeoff mode,” says an aviation expert requesting anonymity.

“So no TR and full-throttle indicate that they tried to take off after realising that they were unable to stop the plane,” he said.

In fact, the global flight tracker website flightradar24.com shows that the crashed aircraft had tried to land twice at the airport before it made the last unsuccessful attempt.

However, another image shows the position of wings flaps at 40 degree which, experts say, is a landing position. He added that the pilot after extending the flap for landing might not have brought it back to the take-off position.

“When a bird flies, it changes its wing position to minimise or maximise its speed. Similarly, in aircraft, there are flaps on the wings which are kept at different angles to utilise air pressure for landing or taking off. Extended flap position creates a drag which helps an aircraft stop,” another aviation expert said, refusing to be named.

Asked if the crash had changed the position of these types of equipment, he said, “It is highly unlikely that due to crash or rescue operation, these parts would have been fiddled with.”

So does that mean the two deceased pilots share the blame for the crash? “I don’t think so. One of the two pilots, Captain Deepak Sathe who was in command of the aircraft, was a test pilot. So, there must be other aggravating circumstances which forced them to decide to take off,” Prabhat Kathuria, the husband of Marya Zuberi, the co-pilot who was killed in the Ghatkoper Air crash, said.

He added, “It will be unfortunate if other stakeholders get away with their responsibility by putting the blame on the pilot.”

Safety experts also say that poor maintenance of the runway and the airport are often primarily responsible for the majority of the accidents but other stakeholders like the government and the regulator conveniently put the blame on pilots and get away.

They say, for instance, the continuous landing and takeoff causes rubber deposits on the runway which need to be removed regularly as during the rainy season, they cause the wheels to skid off.

A senior pilot from Jet Airways said, “I had faced a similar problem at the Mumbai airport while landing but somehow I managed it and I complained to ATC that the rubber deposits need to be cleansed. Two days later, I came to know another aircraft skidded off from the same runway.”

Yeshwanth Shenoy, the advocate who has filed a Public Interest Litigation in Kerala High Court for CBI probe of the crash, said: “Unfortunately, the sole purpose of the enquiry is to put the blame on pilots and poor weather. The government and the regulator will never admit that airports are poorly managed and safety measures compromised. I feel the pain to share that the Calicut-like incident is waiting to happen on other airports if the aviation ministry doesn’t wake up even today.”