The mortal remains of co-pilot Akhilesh Kumar were cremated on Sunday with attendance from all family members as well as with the officials of Air India and Air India Express present. 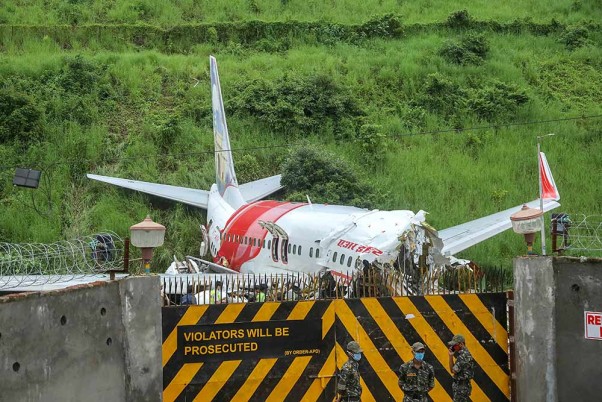 Security personnel stand guard near the mangled remains of an Air India Express flight, en route from Dubai, after it skidded off the runway while landing on Friday night, at Karippur in Kozhikode.
PTI Photo
PTI August 09, 2020 00:00 IST Kozhikode Air India Crash: Mortal Remains Of 16 Passengers Handed Over To Families

Air India Express said on Sunday that the mortal remains of the 16 passengers who lost their lives in the Kozhikode plane crash had been handed over to their families.

The mortal remains of pilot-in-command Deepak Vasanth Sathe have already been taken to the Cochin International Airport, from where it would be taken to Mumbai later in the day, the airline said in a statement.

The mortal remains of co-pilot Akhilesh Kumar were cremated on Sunday "with attendance from all family members as well as with the officials of Air India and Air India Express present to mark respect to the departed soul at Mathura, his hometown", it said.

The flight from Dubai with 190 people on board, including a six-member crew, overshot the tabletop runway on Friday night while landing at the Kozhikode airport in heavy rain, fell into a valley 35 feet below and broke into two, killing 18 people, including both pilots.

"AAIB (Aircraft Accident Investigation Bureau) has initiated the investigation into the accident with the support of Flight Safety Officials," the airline said.

"As regards the deceased passengers, the mortal remains have been handed over to the families with their consent," it said.

A total of 149 people have been admitted to various hospitals. Twenty-three have been discharged, while three are critically injured, Civil Aviation Minister Hardeep Singh Puri had said on Saturday after his visit to the Kozhikode Medical College, where many of the affected passengers have been admitted.