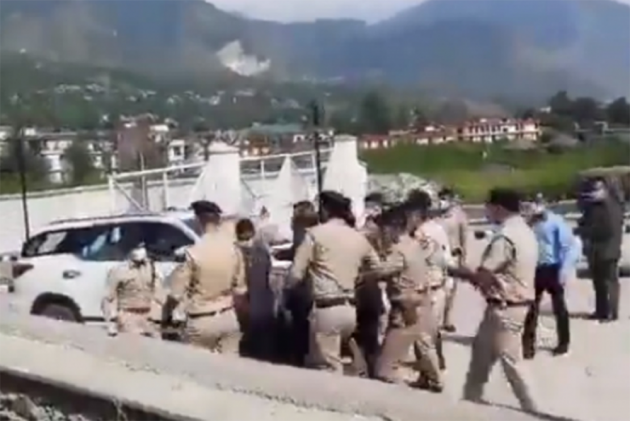 Former Superintendent of Police (Kullu) Gaurav Singh and Chief Minister ‘s PSO Balwant Singh have been squarely indicted in the inquiry into the ‘Kullu slapping’ episode and the report has now reached Chief Minister Jai Ram Thakur for disciplinary action.

Director General of Police Sanjay Kundu said the police headquarters has also made its recommendations for appropriate action against the erring police officials. One of these happens to be Gaurav Singh—a 2013-batch IPS officer.

Brijesh Sood, Chief Minister’s Additional SP (Security), who was slapped by Gaurav Singh after their heated arguments and public spat over the VIP security, has also faced censure in the inquiry report. He has been accused of attempt to tamper with pre-approved VVIP security deployments and VIP protocol.

The video of SP Gaurav Singh slapping Brijesh Sood during the visit of Union Minister for Highways Nitin Gadkari at Kullu on June 23 had gone viral and thereafter it was Balwant Singh, CM’s PSO, seen roughing up a senior police officer, who happened to be local SP of the district.

The inquiry officer wondered as to why Balwant Singh (PSO) exceeded his call of duty and started hitting the SP with his shoes creating an ugly scene.

The state government has already suspended Gaurav Singh and CM’s PSO Balwant Singh. Brijesh Sood has also been stripped of his charge.

“I admit that the image of the police has taken a severe beating as a result of the incident and a detailed advisory has been issued for the police personnel and officers handling VIP security in the state. We will not tolerate any kind of breach, in discipline, “Kundu said.

The Chief Minister, who this morning left for Mandi to tour his constituency, said “the report of the inquiry and recommendations made by the DGP will be studied before taking any further action".