Kumaraswamy Rules Out Involvement In Phone Tapping Of Seer 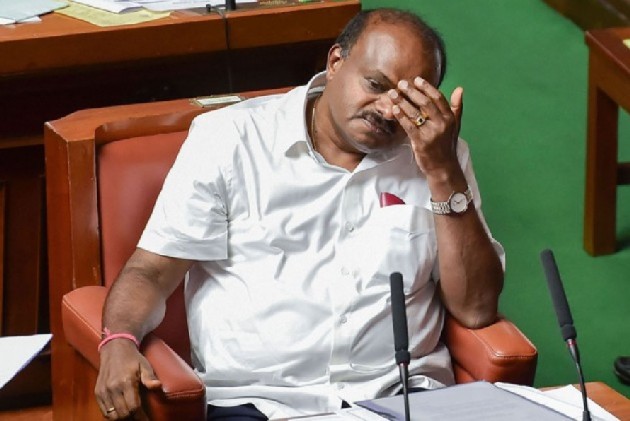 Former Karnataka Chief Minister H D Kumaraswamy Sunday ruled out any involvement in the case of alleged tapping of the phone of Nirmalananda Swamiji, an influential seer of the dominant Vokkaliga community in the state.

Kumaraswamy also said the allegation has caused him "unbearable pain."

The JD(S) leader said unnecessarily his name was being linked to the case, and that the seer was a moral support and a guide for him.

"The reports about tapping of Nirmalananda Swamiji's phone during my administration and statements by political leaders regarding it has caused unbearable pain to my heart. Above all this might have upset Swamiji has increased my pain," Kumaraswamy said in a tweet.

Swamiji even prayed for him to lord Kalabhirava, he said. "Is it possible for me to take a suspicious step regarding him? Absolutely not," he said.

"Unnecessarily my name is being linked to this case. Asoka (Minister) has gone ahead of everyone and has sought an apology for a mistake that has not happened. I don't know what he gained from this. I feel pity for his hurried move," he added.

Deputy Chief Minister C N Ashwath Narayan and Revenue Minister R Ashoka, who hail from Vokkaliga community had sought to corner the former Chief Minister Kumaraswamy and his administration by raking up the alleged phone-tapping of Nirmalananda Swamiji of the Adichunchunagiri Mutt.

Ashoka had gone a step further and apologised to the seer, whose phone was tapped, on behalf of the system, and said, "it is a mistake, no government should do it.. whoever did it, must face punishment, our government will take all necessary action."

CBI sleuths had on Thursday had carried out searches at the residence of former Bengaluru Police Commissioner Alok Kumar in connection with alleged phone tapping of politicians
and bureaucrats during the tenure of the Congress-JD(S) government headed by Kumaraswamy.

However, the JD(S) leader had strongly denied it and said he was ready for any probe.

Kumaraswamy too belongs to Vokkaliga community, which is considered as his party- the JD(S) strong vote bank.

Vokkaligas are dominant in the old Mysuru or Southern Karnataka region, where BJP is trying to make further inroads.