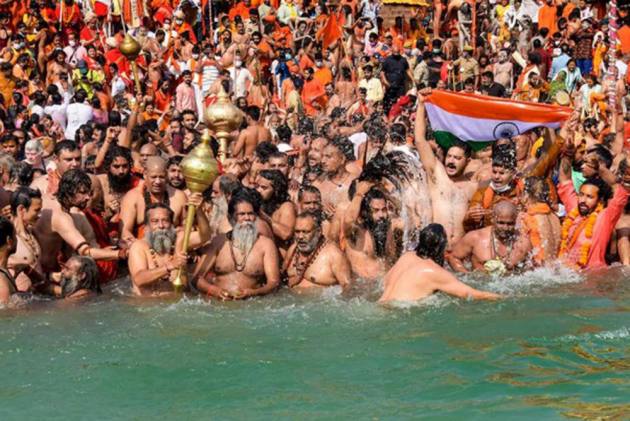 Amid the second wave of the pandemic gripping the country, Joona Akhara, one of the largest sects of seers in the country, announced the end of its participation in the ongoing Kumbh Mela on Saturday.

The development comes just hours after Prime Minister Narendra Modi urged the organisers of the Kumbh Mela to make it a “symbolic” event.

“The people of India and their survival is our first priority. In view of the outbreak of the Coronavirus pandemic, we have duly immersed all the deities invoked on the occasion of Kumbh. This is the formal immersion-conclusion of Kumbh on behalf of Joona Akhara,” Swami Avadheshanand Giri, the ‘mahamandaleshwar’ of the Joona Akhara, said in a tweet in Hindi.

Kumbh Should Now Be Symbolic: PM Modi To Head Of Juna Akhara

An enclosed note signed by Giri, Joona Akhara patron Hari Giri and secretaries Mahant Mohan Bharti and Mahant Mahesh Puri said the decision to immerse the Kumbh deities had been taken in public interest after consultations with seers of the Akhara.

"Immersing the deities, we also pray to all ‘teertha’ and ‘siddhapeeth’ and declare the immersion of Haridwar Kumbh Mela, 2021," it said.

Over 1,700 participants contracted Covid-19 from April 10 to 14 confirming fears that one of the world's largest religious gatherings may contribute further to the rapid rise in coronavirus cases.

Chief Medical Officer Shambhu Kumar Jha on Thursday said that the numbers include both RT-PCR and Rapid Antigen Test reports of devotees and seers of different akharas (ascetic groups) over the five-day period in the entire Mela Kshetra extending from Haridwar to Devprayag, Haridwar.

Earlier today, a plea was filed in the Supreme Court seeking directions to the Centre and others to clear the "mass gathering" from Haridwar amid a surge in Covid-19 cases across the country and prescribe a safety protocol with respect to people returning from Kumbh Mela.

The plea, which referred to the recent spike in Covid-19 cases, has also sought directions to the Centre and the Uttarakhand government to immediately withdraw the advertisements inviting people to Haridwar for Kumbh Mela.

It said that the Election Commission should be asked to issue direction to the authorities in the states where elections are being held to strictly enforce Covid-19 guidelines during the poll process and take appropriate action against the violators.

The plea, filed by Noida-resident Sanjai Kumar Pathak, said that Covid-19 cases are increasing rapidly across the country and the health infrastructure is “crumbling” in many states.

It claimed that hospitals and crematoriums are running out of space and shortage of essential drugs has been reported from many cities.

The petition said that India is currently witnessing its highest surge in Covid-19 cases since onset of the pandemic, but visuals of lakh of devotees crowding in Haridwar for Kumbh Mela and in election rallies in states have surfaced.

"On the one hand, poor common man on the street is often punished and treated violently by the police and executive authorities for individual violations of COVID-19 rules and regulations in the name of strict enforcement, and on the other hand, the authorities are not only permitting but facilitating and promoting congregation of people in the events like Kumbh-2021 and election rallies,” the plea has alleged.

It sought the apex court's direction to the Centre, Uttarakhand government and the National Disaster Management Authority to not encourage or promote any gathering or event “inconsistent with the spirit and object of the COVID guidelines” and orders issued by these authorities.

"It is axiomatic that the respondents have turned a blind eye towards the violation of COVID-19 guidelines at the Kumbh Mela and during election campaigns and rallies which have the potential to become super spreader events but common people on the street is being fined and challans are being issued,” the plea has claimed.