Banners bearing slogans like "UT of Ladakh celebrates its 1st Independence Day" were hanging along roads of this picturesque town. 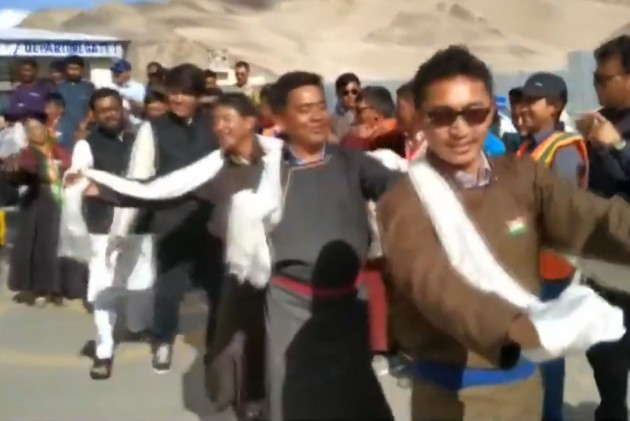 Ladakh, which will become an Union Territory after the bifurcation of Jammu and Kashmir, celebrated Independence Day with fervour on Thursday, with local BJP MP Jamyang Tsering Namgyal saying the region has got "independence from Kashmir".

The parliamentarian, whose speech in the Lok Sabha after abrogation of special status to Jammu and Kashmir drew praises, was seen dancing and playing the drums along with locals.

On August 5, the Centre stripped Jammu and Kashmir of its special status given under Article 370 and split it into two Union territories, Jammu and Kashmir, and Ladakh, which will come into existence on October 31.

The region has got "independence from Kashmir" and the celebration is "just a trailer" for the development of Ladakh, he said.

Banners bearing slogans like "UT of Ladakh celebrates its 1st Independence Day" were hanging along roads of this picturesque town.

In a series of tweets, Namgyal said the tricolour in each and every house of Ladakh symbolises the patriotism of the people and their unwavering commitment towards India.

"Ladakh got independence from Kashmir," he said, adding that the spirit of patriotism is very high among school students and adults alike in the region.

Cultural performances by students were a delight of the celebrations and the entire atmosphere was filled with patriotic fervour and unity.

"So, we decided to celebrate Independence Day in the traditional Ladakhi style through the beating of the 'daman' and 'surna'," he said, adding that these celebrations are "just a trailer for the development of Ladakh".

Namgyal said, "On the occasion of Independence Day, we celebrate the martyrdom of our heroes. We paid our respects to the four young heroes who laid down their lives agitating for the UT status for Ladakh". The four people died a few years ago.

The MP also shared on Twitter pictures of Buddhist monks hosting national flag at his native village Matho, where people were celebrating "1st Independence Day after declaration of Ladakh as an Union Territory".