The build-up at the border—triggered by aggressive posturing and ‘transgressions’ by soldiers of the PLA into the Indian side of the LAC—coincides with a marked rise in anti-China feelings in India in the wake of the COVID-19 crisis. 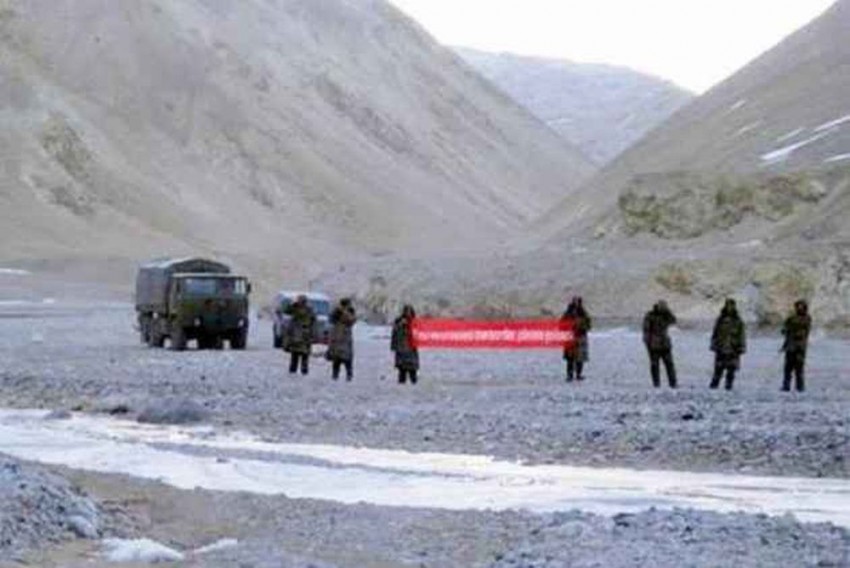 Three years back, a prolonged stand-off between Indian and Chinese troops on Bhutan’s Doklam plateau had sparked off alarming speculations about the proximity of armed conflict between the two Asian giants, and how such a frightening possibility would destabilise the sub-continent and the region beyond. That crisis, however, was resolved in 73 days without a shot being fired.

But similar worries have started clouding minds of policy planners as Indian and Chinese soldiers have over the past week begun to pitch tents and enforce their respective positions along strategic points in Ladakh, in the western sector of the Line of Actual Control (LAC). The build-up at the border—triggered by aggressive posturing and ‘transgressions’ by soldiers of the People’s Liberation Army (PLA) into the Indian side of the LAC—coincides with a marked rise in anti-China feelings in India as it makes common cause with the growing anger against the Chinese across the world in the wake of the COVID-19 crisis.

The question arises if the two developments are linked.

“This seems to be a coincidence, as there is no connection between the two,” says historian Srinath Raghavan, though he feels both sides have gone further than usual. Raghavan referred to incidents that started from May 5-6, when Indian and Chinese soldiers were injured while trading punches and throwing stones at each other in a departure from past norms underlining the avoidance of physical violence.

Barring 1962, when the neighbours went to war over their disputed boundary, not a single bullet has been fired across the Sino-Indian border since 1975. In the intervening period, there have been skirmishes and face-offs. But they were all peacefully resolved.

The 3448-km Line of Actual Control, behind which soldiers of the two countries stand, remains disputed and un-demarcated, yet is not considered a ‘hot border’ like the one between India and Pakistan. Moreover, despite their simultaneous rise within the same geographical space, Indian and Chinese leadership have so far skilfully managed to avoid situations that could lead to another armed confrontation. But heightened tension in the past weeks, following hectic activities of patrolling soldiers of India and China in key points along the LAC, has increased unease.

Indian officials have recorded ‘transgressions’ along the LAC in Pangong Tso Lake, Trig Heights, Burtse, the Doletango area and the Galwan river valley in Ladakh and also at strategic points in Sikkim.

“Better infrastructure, enhanced transportation and communication facilities have increased the probability of Indian and Chinese patrols coming face-to-face,” explains Gautam Bambawale, former ambassador to China. Coupled with aggressive patrolling, this could lead to the kind of situation we now witness, he explains. Bambawale reminds that there are standard operation procedures that the two sides have agreed to and if their soldiers adhere to them the border could be relatively peaceful. On the other hand, if there are attempts to change the ‘status quo ante’, it could lead to trouble, he warns.

Experts say the stand-off in strategic points at Ladakh, like Galwan, is connected to India’s upgradation of the advance landing ground that would allow C-130J aircraft to land and boost strategic airlift capabilities. In addition, a series of roads are being built in the area to enhance India’s access to the Karakoram highway—an area of immense strategic importance for both Pakistan and China.

It is the building of this access road that is being vehemently opposed by China but India seem determined not to abandon its plans of building the required infrastructure—as the Chinese have already done on their side—to facilitate and enhance better access to the armed forces.

But away from the border, the mood in political circles in New Delhi and elsewhere has undergone a significant change. Political leaders, including those from the ruling BJP, like its national general secretary Ram Madhav and cabinet minister Nitin Gadkari, made critical remarks about China in public.

Also Read | The World Is Wary of China. It’s Good For Our Country: Nitin Gadkari

“I really don’t see any special change in India’s approach towards China,” says C. Raja Mohan, director of the Institute of South Asian Studies, National University of Singapore. “The worldwide concern is about China getting assertive in its responses to questions on its handling of the COVID-19 crisis,” he adds. Raja Mohan points out that in India the public debate, especially from the political class, has always been free-flowing; there have been voices that have always been critical of China and those who resolutely supported Beijing irrespective of the merits involved.

“But the section that is responsible for the China policy, especially the MEA, remains careful and measured in its response,” he says, indicating that Beijing should look through the clutter to make sense of how the Indian government looks at it in this prevailing international mood.

Raghavan feels joining a Western chorus of criticism of China makes it easier for New Delhi to express displeasure at China’s handling of the pandemic. “At a time when many others are talking tough with China, it’ll be difficult for Beijing to target India,” he says.

Hardliners, however, are disappointed with the government’s stand. “India is not adopting a policy that is assertive enough towards China,” says former Indian foreign secretary Kanwal Sibal. “China’s provocations that touch our core interests continue,” he adds. According to Sibal, China has not only repeatedly attempted to put Kashmir on the UN Security Council agenda, but also challenged India’s sovereignty in Arunachal Pradesh and Ladakh.

“On the latest provocations in Sikkim and Ladakh, our initial reaction was mild and even apologetic,” feels Sibal. “But the MEA spokesperson corrected the earlier mistake by accusing the Chinese side of hindering normal patrolling patterns, affirming that all Indian activity is on the Indian side and that India was committed to protect its sovereignty and security.”

Bambawale, who has been part of crafting the China policy, makes it clear that there was nothing new about India’s stand. “India has for many decades taken strong positions vis-a-vis China where our fundamental interests were involved,” says the former envoy. He cites examples to explain the Indian stand—referring to the 2017 Doklam stand-off, the Sumdorong Chu incident in the late 1980s or the 1998 decision to test a nuclear device. “India has always taken strong, difficult decisions when its fundamental interests were involved. I think this continues to be true today,” he adds.

Bambawale also refers to the recent guidelines India announced for investment from China, saying, “The recent change in FDI flows from China is in India’s basic interest. Even then, we will continue to welcome Chinese investment but through the government route.” Stressing his initial point, he says, “I believe there is more continuity than change in India’s policy toward China.”

But the current developments play out at a time when the US and China are locked in a major battle for supremacy and influence at the global stage. How will it affect India, whose ties with Washington have been growing steadily over the years? “The US affects all major bilateral relations in the world,” says Raja Mohan. “As the second most important power, China does the same today.” Referring to developments of the 1970s, when the US engaged China diplomatically, Raja Mohan points out how it forced New Delhi to lean more towards Moscow.

According to him, after four decades of deepening economic integration, America and China are drifting apart. Domestic politics in the US, awaiting a presidential election, has certainly complicated the dynamic. It can also be presumed that domestic political considerations make it ever more important for President Xi Jinping to be seen as standing up to American pressure. “All countries will now have to cope with worsening ties between US and China,” says Raja Mohan.

Indian ties with China must navigate these choppy waters, with India ensuring that much-needed investment from China continues to pour in. “The step to change the approval route for Chinese investments was necessary to prevent China’s predatory economic policies,” says Sibal. He points out that there is no bar to Chinese investments per se, the intent is to prevent China’s acquiring assets on the cheap as a result of their fall in value owing to the pandemic.

Raghavan is sceptical whether future ties between the two neighbours will be smooth. “I think New Delhi needs to be clear about the kind of relationship it wants with China,” says Raghavan. On one hand, he points out, there is a desire to call out Chinese handling of COVID-19 and try to position India as an alternative destination for global value chains. On the other, there seems to be an awareness of the need for continued investment flows from China and the importance of not getting into a hostile fracas with a stronger neighbour. “The tensions between these competing imperatives needs to be managed better,” adds Raghavan.

So far, India and China have done well to manage the contradictions in their relations. As Raja Mohan indicates, border tensions have steadily risen over the past decades, while the economic relationship has become unbalanced, with a massive trade deficit against India that has been difficult to overcome. “But the stakes for both countries are only higher now,” he says. “One hopes the current tensions will not escalate into a major crisis.”

Former foreign secretary Sibal has no illusions about the future of Sino-Indian ties. “The impact of China’s hegemonic ambitions on India will remain a serious problem, requiring, as before, engagement and hedging,” he observes in an opinion piece.

Bambawale is more pragmatic. “India-China relations have always been complex. It is likely to get more so now”. He feels India needs to keep its relation with China on track while furthering its own national interest. He points out the need for a new template, as the underlying realities have changed. “This was the effort made at the Wuhan Informal Summit. But it is still a work in progress,” says the former envoy to China. That work, it is to be hoped, must never be hostage to border tensions.