Ladakh: The images of Army holding Tricolour at Galwan valley as part of New Year celebrations were also posted by Union Minister Kiren Rijiju. The images were released three days after China's state media played up a purported video of PLA soldiers near the Galwan valley. 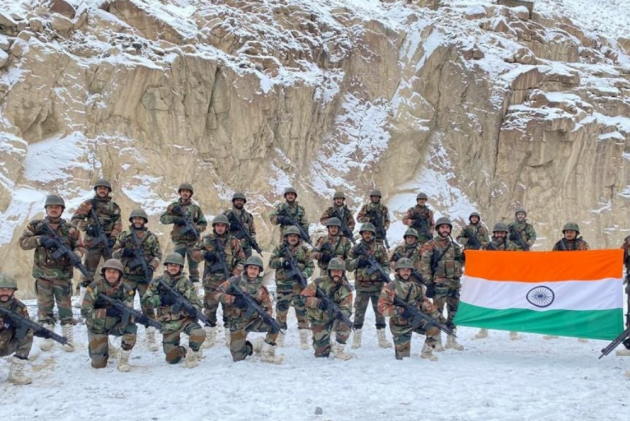 Photographs of Indian Army troops holding a large tri-colour at the Galwan Valley in eastern Ladakh as part of the New Year celebration were released on Tuesday by sources in the security establishment.

The photographs were also posted by Union Law and Justice minister Kiren Rijiju on Twitter with the caption "brave Indian Army soldiers in Galwan Valley on the occasion of #NewYear2022."

Brave Indian Army soldiers in Galwan Valley on the occasion of #NewYear2022 pic.twitter.com/5IyQaC9bfz

The images were released three days after China's state media played up a purported video of PLA soldiers sending New year greetings to Chinese people from a location near the Galwan valley region.

In one of the photos, released by the sources in the Indian security establishment, around 30 Indian soldiers were seen with the national flag.

Another photo showed the group with four of them holding the national flag and another tri-colour flying high on a flagpole adjacent to a temporary observation post.

The sources said the photographs were of January 1 in the Galwan Valley.

The Indian and Chinese troops exchanged sweets and greetings at 10 border points along the Line of Actual Control (LAC) including in eastern Ladakh and North Sikkim on January 1, which was seen as a warm gesture in the midst of the lingering row in eastern Ladakh.

However, China's state media played up the Chinese PLA's hoisting of the country's national flag appeared to be on its side of an area near the Galwan Valley.

The sources in the Indian security establishment said the site of the Chinese soldiers celebrating the New Year is in a depth area on the Chinese side near the Galwan Valley region and that it is not at all close to the buffer zone created in the region following the deadly clashes on June 15.

The eastern Ladakh border standoff between the Indian and Chinese militaries erupted on May 5, 2020, following a violent clash in the Pangong lake areas.

As a result of a series of military and diplomatic talks, the two sides completed the disengagement process last year in the north and south banks of the Pangong lake and in the Gogra area.

The 13th round of Corps Commander-level military talks in October ended in a stalemate with the Indian Army saying that the "constructive suggestions" made by it were not agreeable to the Chinese side.

In their virtual diplomatic talks on November 18, India and China agreed to hold the 14th round of military talks at an early date to achieve the objective of complete disengagement in remaining friction points in eastern Ladakh.

It is learnt that the Chinese side is yet to respond to the next round of military talks.

The defence ministry on Friday said it held several rounds of military talks with the Chinese side to deescalate the situation in eastern Ladakh without compromising on its stand of 'complete disengagement and immediate restoration of status quo ante.

India has been insisting on returning to the status quo that existed before the face-off took place in early May 2020.