This year’s snow festival in Lahaul will mark the longest celebration of the spirit of cultural reunion in the valley. 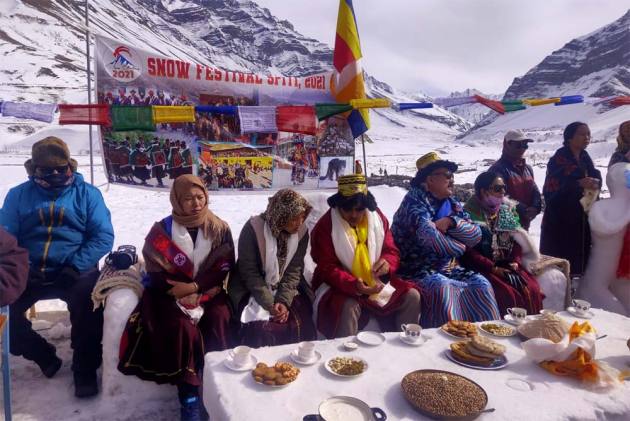 A little over three weeks have passed since Lahaul’s snow festival started and the high-altitude tribal valley rediscovered its ‘soul and spirit’ after the opening of Atal Rohtang Tunnel ushered in new hopes.

The tribal civilisation in the Spiti valley used to remain isolated behind the 13,059 feet Rohtang Pass, for at least six months due to harsh winters.

But the opening of Atal Rohtang Tunnel– world’s longest traffic tunnel–has now provided all-weather connectivity to the tribal population in the region.

This year’s snow festival in Lahaul will mark the longest celebration of the spirit of cultural reunion in the valley. The entire region is abuzz with festivities soaked in cultural diversities revisiting some of their forgotten traditions.

“Initially, we proposed, that the snow festival be a two-month-long activity but looking at the enthusiasm, response and excitement, I have decided to make it an 80-day event. We have restricted it to the locals right now in order to see how things work, however, there is a wider objective to host the snow festival as the biggest world tourist attraction in the snow captivating paradise of Lahaul-Spiti next year”, says Pankaj Rai, Deputy Commissioner.

From traditional dance forms to tribal delicacies– the snow festival in Lahaul has got it all.

Games like archery and Tug-of-war being organised at new locations every day have turned out to be among the most exciting activities for youth and women. Local youth introduced igloos in the fest, which they have proposed to open for tourists from next season. The visitors are being greeted with the finest delicacies served on tables and chairs made of ice.

“Women, who normally used to remain inside, have shown overwhelming participation. They have engaged in cooking some of the forgotten traditional cuisines and have joined knitting competitions, folk songs recitals and have turned the whole environment into a rare festivity”, narrates Rai.

Traditional games chholo (ancient game of dice), archery and ancient musical instruments are out for public display. For the first time, the Lahauls celebrated ancient festivals including Fagli, Halda, Losar, Kuns, Jukaru, Gochi, Poona and Lamohi together at larger platforms.

According to Rai, the best part is that the snow festival is happening at “zero-cost” for the government. Everything is collectively funded and hosted by the locals, mahila mandals and youth. There is no burden on district administration as it's a completely participatory exercise.

C M Parseera, a noted tribal expert and director, Vocational Studies Institute, HP University, said, "We had never seen such an involvement of the local communities at this time. The villagers are competing with each other to put up the best show and bring out new things from their collections/archives to enthral and capture the attention of their guests. I compliment deputy commissioner Pankaj Rai for his novel initiative. By next year, it's definitely going to get the world's attention and put Lahaul Spiti on the world map".

The excitement indeed seems to be more about the end of their centuries-old suffering and opening of the valley to the world after Rohtang Tunnel.