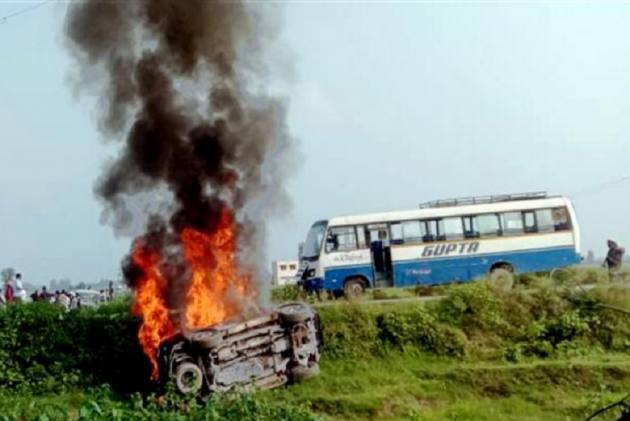 “Now she has turned 21 and I am looking for a suitable match for her.” These were the words of a loving father to his family before leaving for the farmer’s protest at Tikonia village, 70 km from his village, Namdar Purva, in Lakhimpur Kheri district, on October 3.

Nachhatar Singh’s youngest daughter Amandeep Kaur had finished Class 12 a few years ago and Singh’s priority was to search for the right groom for her. He had already started discussing her marriage prospects to close friends and relatives.

However, October 3, which had begun on a happy note, ended with acute grief-- Singh never returned to fulfil his words.

A speeding Mahindra Thar jeep mowed him down with three other farmers at the protest site. In a viral video of the accident, he was seen being hit first from behind when he was walking away from the site with other farmers.

The two other vehicles following the jeep also ran over the fallen men. Singh’s oldest son Jagdeep is still clueless about what happened.

“He rode a bike to cover the 70 km distance to the protest site. In the evening when some friends called me to say that some untoward incident had taken place at Tikonia, I made frantic calls but couldn’t find out anything,” Jagdeep said.

He added, “I heard some people took him to a district hospital there. He was declared dead. Then he was brought back to the accident site with the three others who died.”

Jagdeep said that since his father was alone, no one took any care. “Had any family member accompanied him, he would have been treated better and might have survived,” he said.

Jagdeep, like many other farmers, alleged that the jeep was being driven by Ashish Mishra, the son of the Union minister of state for home, Ajay Mishra Teni. They say that he did it deliberately to flaunt his power, as the minister was quite upset with the protest.

“Everyone knows that it was Ashish Mishra. Even the police officers saw everything, but did nothing to arrest him. It is quite obvious that the police and state were hand in glove with Mishra in the crime,” Jagdeep alleged.

Singh had 6.5 acres of land and had shifted to Namdar Purva over 50 years ago from Punjab. His oldest son and youngest daughter were living with him at the time of his death. His second son, Mandeep Singh, 26, has been undergoing training in Almora for the past six months after he was selected for the Sashastra Seema Bal (SSB).

Singh’s family said they don’t know the exact cause of his death as they were never given a copy of the post mortem report.

Jagdeep alleged that the state machinery is doing everything to shield the culprits. “We have no trust in the ongoing investigation as long as Teni is not removed from his post. Tell me one investigating officer in India who has the guts to go and interrogate a minister of state for home? How can it be a fair trial then?” Jagdeep asked.

He said that he has received a compensation of Rs 45 lakh from the state government but that is meaningless “if those who committed the crime are not punished”.