Priyanka Gandhi has emerged more visible in the wake of Lakhimpur Kheri than any other opposition politician in Uttar Pradesh. 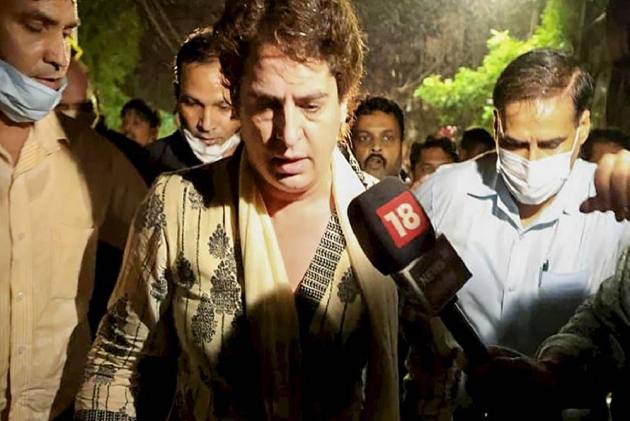 Has Lakhimpur Kheri been a springboard for Priyanka Gandhi in Uttar Pradesh?

Experts and officials in the state do not think so.

As opposition parties hit the streets to take on the BJP in Uttar Pradesh early next year, there has been much buzz that Priyanka Gandhi has emerged more visible in the wake of Lakhimpur Kheri than any other opposition politician.

Apart from Rakesh Tikait of the farm agitation, none generated a hype like Gandhi, who told the UP police team out to detain her that she wanted a warrant and cautioned them that they could be booked if they acted illegally. Confined in a guest house, she was seen sweeping the floor of her room.

In her latest move that has made news, she has announced that 40-percent of Congress tickets in the state will be reserved for women, something that the Congress hasn't done in states where it is still powerful.

Recently, she was also seen at the 'antim ardas' of the four farmers who had allegedly been mowed down by a vehicle purportedly belonging to Union minister Ajay Kumar Mishra Teni.

In terms of media optics, she certainly beat Akhilesh Yadav of Samajwadi Party, who has a much larger vote bank than the Congress, which has lost its support base in UP completely for the last three decades.

"All the optics is aimed partially at showing that the Congress is not irrelevant in UP and partially at symbolically reaching out to voters in Punjab, where the Congress has seen much upheavel at the top in the last month or two at a time when elections are approaching," says an official in the know of things in UP. "The fact is that Akhilesh Yadav is the electorally strongest opposition leader in UP. Rajaram Pal of the Congress has already shifted to SP and a few others may soon follow suit."

If the Congress isn't in the race, why are the Gandhis resorting to optics that may not help the prime contender to the BJP, the Samajwadi Party?

Allahabad-based academic Badri Narayan says the Congress is looking more at its long-term prospects than the present election and wants to rebuild itself in the state over some years.

"The Congress is clear it won't lie low to tacitly project Akhilesh Yadav as the prime opposition face. The Congress will assert that it isn't playing second fiddle to anybody and is willing to wait for its turn to be seen as a serious player," Narayan says. "It does not matter whether this helps or damages the SP, or ends up being blank optics."

Significantly, Acharya Pramod Krishnam of Congress, who is seen as close to Priyanka, was seen with Shivpal Singh Yadav, uncle of Akhilesh who had split the SP some years back to form the Pragatisheel Samajwadi Party, in his yatra from Mathura to Raebareli. Asked about his presence, Krishnam said this was in his personal capacity.

Opinion is divided on whether this has the Congress' blessings or the leader himself is willing to be seen in the presence of Yadav.

However, a UP official told Outlook that with Shivpal wanting an arrangement with the SP, their coming together to close ranks against the BJP before the polls cannot be ruled out.

With SP sitting on a vote bank of 19-percent Muslims and 8.7-percent Yadavs (as per the 1931 census), the SP seems much better placed than the Congress to challenge the BJP in the polls.