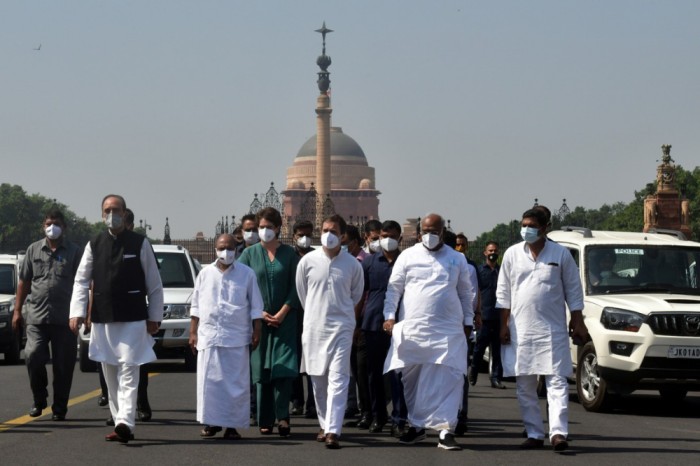 The party’s delegation also sought an impartial judicial probe into the incident by two sitting judges of the Supreme Court.

The party also presented a memorandum of facts about the Lakhimpur Kheri incident to the President.

Four farmers were among eight people killed in the violence in Lakhimpur Kheri on October 3.

After the meeting, Gandhi said he conveyed to the President that the MoS Home should resign to ensure an impartial probe in the Lakhimpur violence as his son Ashish is an accused in the matter.

Ashish Mishra, who has been named in the FIR and is accused of mowing down farmers in Lakhimpur Kheri, was arrested on Saturday by the Uttar Pradesh Police.

Gandhi demanded that to ensure justice, two sitting Supreme Court judges should probe the incident and those who have committed the murders should be punished.

"There cannot be an impartial inquiry and justice cannot be given till the time the MoS Home is sacked. This is the voice of not just the families of those killed but of all the farmers and this voice is being suppressed," he said.

Asked whether they have received any assurances from the president, Priyanka Gandhi claimed, "he (President) has assured us that he will talk to to the government in this regard today itself".

The Congress memorandum said the situation is unlikely to change without any intervention given that BJP leaders, including UP CM Yogi Adityanath, continue to make conciliatory statements towards Ajay Mishra.

"Ajay Mishra's role is also yet to be investigated and the same is unlikely while he continues in office. Furthermore, which police official would dare to fairly investigate the son of Union MoS Home Affairs with the father occupying a position of such high influence and who enjoys continued endorsements from both the Central and the State governments.

In these difficult circumstances, we call upon you as the custodian of our Constitution and the moral compass to this Government to immediately dismiss Union MoS Home Affairs and to direct an independent judicial investigation by a Commission comprising of two sitting judges of the Supreme Court of India or the high court," the Congress memorandum said.

The party hoped that the President will treat this matter with the urgency it deserves and take appropriate action.

The Congress memorandum also mentions that like crores of other Indians, the President is also "deeply affected" by the "unforgivable and merciless murder" of farmers in Lakhimpur Kheri.

"The incident has scarred the soul of India. This deliberate act of murder, in broad daylight followed by the audacious reactions of the State and Central governments, has completely eroded the people's faith in those tasked with bringing these perpetrators to justice," the party said. (With PTI inputs)