Farmer unions on Tuesday are observing Shaheed Kisan Diwas on October 12 which includes a mass prayer meeting and candlelight vigils in honour of the four farmers killed last week. 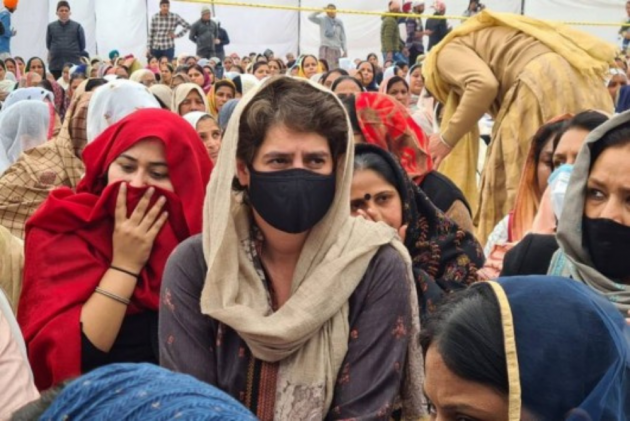 The last funeral rites of the four farmers killed in the Lakhimpur Kheri violence last week was held in Uttar Pradesh on Tuesday amid major crowds. From Monday night onward, hundreds of protesters and supporters from outside the state started pouring in to offer their last prayers or "antim ardas" to the farmers who lost their lives in the October 3 violence.

The "antim ardas" for all the slain farmers is being organised in Tikonia at a field away from the spot where the violence took place in the village. Political leaders like Congress's Priyanka Gandhi paid their respects to the farmers.

Lakhimpur Kheri: Hundreds Pour Into UP To Offer Prayers At 'Antim Ardas' of Slain Farmers

The Rakesh Tikait-led Bhartiya Kisan Union, one of the organisers of the "Antim Ardas" ceremony, had asserted that no politicians or police will be given the stage to speak and that only farmers would address the event.

Nevertheless, Congress leader and UP Congress General secretary Priyanka Gandhi Vadra visited the site to pay her final respects. She was on her way to Lakhimpur Kheri early on Tuesday morning.

Some Congress leaders were allegedly stopped from entering Lakhimpur Kheri, according to reports. Taking to social media, Congress tweeted visuals of Congress workers being stopped by police at Sitapur, en route to Lakhimpur.

On Saturday, the Samyukta Kisan Morcha gave a call for a Shaheed Kisan Kalash Yatra which is set to commence today from Lakhimpur Kheri. SKM leader Yogendra Yadav appealed to citizens to light five candles out of their houses at 7 pm on October 12 as a mark of protest.  The SKM also said that the day will be observed as 'Shaheed Kisan Diwas' (Martyred Farmers' Day) in honour of the farmers who were killed in Lakhimpur Kheri following violence that broke out last week. The farmers were among the eight total persons killed in the incident.

The collective "antim ardas" is expected to be attended by farmers from Punjab, Haryana, Uttar Pradesh and Uttarakhand and farmer leaders, including Rakesh Tikait.

"The families of the farmers killed in the violence are likely to arrive today. A pandal has been set up on the outskirts of Tikonia to accommodate the people.

Many people from Punjab, Haryana and Uttarakhand started arriving in their own vehicles. from Sunday night itself and setting up pandals on agricultural fields.

Police personnel in large numbers are being deployed in the area to ensure smooth movement of the public and maintain law and order.

Baba Kala Singh of the Kaudiyala Ghat gurdwara at Tikonia village said an "akhand path" had started on Sunday which went on till Tuesday morning. A 'bhog' distribution program has also been organised in which farmers and leaders from across farm unions as well as from other states and districts of Uttar Pradesh will participate.

What happened at Lakhimpur Kheri?

The four farmers were allegedly knocked down by a vehicle carrying BJP workers.
Infuriated farmers then allegedly attacked the persons in the car, leading to the deaths of four persons. The other dead included two BJP workers and their driver. A local journalist had also died in the violence.

Farmers claimed that Union Minister Ajay Mishra's son Ashish Mishra was in one of the vehicles, an allegation denied by him and his father. The SKM and other farmer leaders have demanded the arrest of the father-son duo.

Ashish Mishra was sent into three-day custody by a court on Monday.

On Tuesday, Uttar Pradesh Police took MoS Home Ajay Mishra's son Ashish to the Crime Branch office in Lakhimpur Kheri for interrogation. Chief Judicial Magistrate Chintaram on Monday had granted three-day police remand, with the condition that Ashish Mishra would not be harassed and his lawyer would remain present during interrogation.

He was arrested on Saturday night in connection with the October 3 Lakhimpur Kheri violence.

The police had demanded a 14-day remand of Ashish, but got a three-day remand beginning October 12 and ending on October 15.

Ashish Mishra was questioned for 12 hours in the Crime Branch office on Saturday before his arrest. Now the Special Investigation Team, set up by the state government to probe the case, will further interrogate him about the incident.