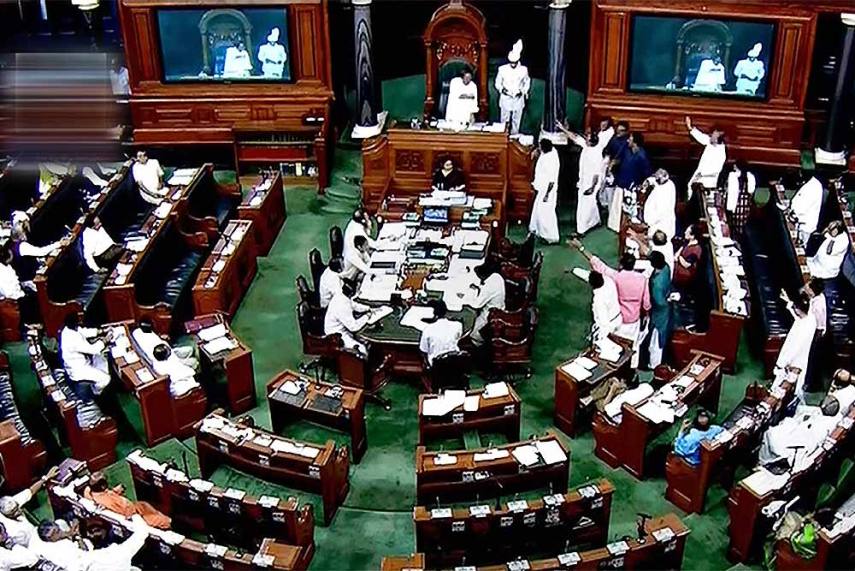 Lok Sabha proceedings were adjourned till 2 pm on Wednesday as Opposition members raised the issue of the Special Investigation Team's report on the recent violence in Lakhimpur Kheri in Uttar Pradesh, and demanded the sacking of Union minister Ajay Mishra.

The minister's son Ashish Mishra is among the 13 accused in the violence that took place in October wherein at least four farmers and a journalist were killed.

As soon as the House met for the day, Opposition members, including those from the Congress, DMK and some Left parties sought to raise the issue. Later, they began shouting slogans, displaying placards and several members trooped into the Well.

They were holding placards demanding sacking of 'farmers' killers'. Some posters displayed messages urging the prime minister to sack the minister.

Despite the din, four questions and supplementaries were taken up till 11.30 am before Speaker Om Birla decided to adjourn the proceedings till 2 pm.

While several opposition members were in the Well, TMC MPs were at their seats.

The members did not yield to repeated pleas of the Speaker that the issue can be raised after the Question Hour and vociferous protests continued.

"My effort is always to conduct the Question Hour so that the good tradition continues and important questions are taken up... I always give adequate time to members to raise issues... you (protesting members) are disrupting the Question Hour. It is not a good tradition and does not give respect to the House. You don't want to have discussions," Birla said.

With no let up in the protests, a visibly peeved Birla told the protesting members that they have not come to the House to raise slogans.

Parliamentary Affairs Minister Pralhad Joshi urged the members protesting in the Well of the House to wear masks, saying that Covid is not over and standing near the House officials without wearing masks puts everyone at risk. As elected representatives, is it right that the representatives do not follow rules, he wondered.

The minister also requested the Speaker to give directions to the protesting members in this regard.

The SIT probing the Lakhimpur Kheri violence has told a court that the killing of four farmers and a journalist was a "pre-planned conspiracy".