'Union MoS Ajay Misra Teni's son should be arrested. They can arrest us without FIR or order… Why are the criminals not being arrested?' said Priyanka Gandhi. 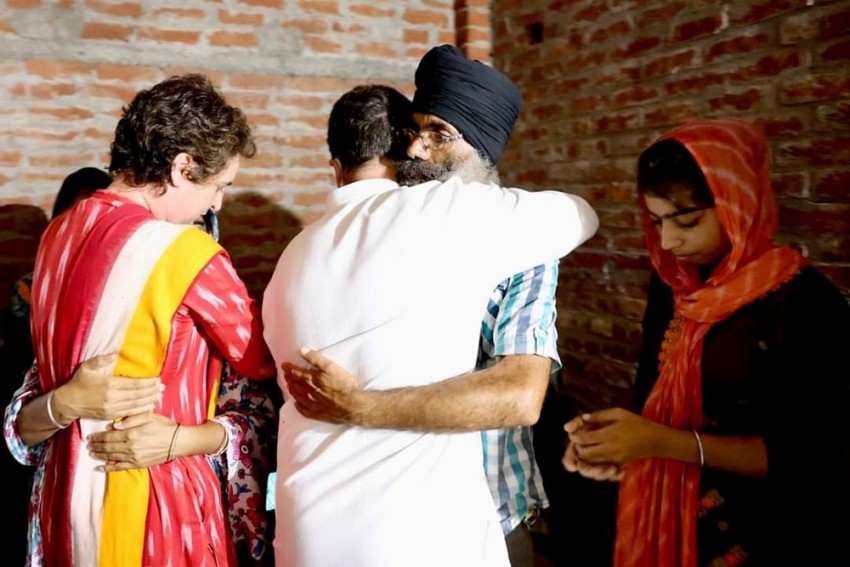 Congress leaders Rahul Gandhi and Priyanka Gandhi Vadra on Wednesday met the family members of farmers killed in the violence in Lakhimpur Kheri and promised them all assistance.

They arrived in Lakhimpur after the Uttar Pradesh government allowed them to visit the violence-hit district. They had been stopped by the police, along with various other opposition leaders earlier.

“All the three families have said one thing - they are not concerned about compensation but want justice,” she said when asked about the financial assistance announced for the victims’ families.

Demanding the resignation of Union Minister of State for Home Ajay Kumar Mishra, she said, “They (victims’ families) will not get justice until the minister resigns as an impartial inquiry is not possible because he is the minister of state for home.”

When asked about the minister’s son, who has been named in the FIR, she said, “He should be arrested. They can arrest us without FIR or order… Why are the criminals not being arrested,” she asked.

Earlier, Rahul Gandhi and his sister Priyanka Gandhi left for Lakhimpur together in a car from a police guest house in Sitapur where she was kept in detention since Monday morning.

Their first stop was home of deceased farmer Lovepreet Sigh in Palia tehsil. From there, they went to the native place of journalist Raman Kashyap, who was one of the victims, in Nighasan tehsil. Their last stop in the district was the home of Nachatar Singh in Dhauraha tehsil.

Priyanka Gandhi is scheduled to meet the families of the remaining victims on Thursday.

Palia is about 80 km from Lakhimpur town, and Nighasan is another 15-20 km and Dhauraha, 60-70 km from there. Lakhimpur Kheri is around 225 km in the north-western direction of the capital Lucknow.

The two farmers and the scribe of a private TV channel were natives of Lakhimpur, while two other farmers who died in the October 3 incident hailed from the neighbouring Bahraich district.

In addition to the five, three others -- two BJP workers and a driver of Mishra -- had also lost their lives in the revenge action of farmer protesters.

The Congress leaders' visit came after Uttar Pradesh permitted politicians to travel to Lakhimpur Kheri but not more than five people at a time.

Earlier in the day, a high-voltage drama played out at the Lucknow airport where Rahul Gandhi staged a dharna briefly to protest the administration's decision to take him to Lakhimpur in a police vehicle instead of his own.

Later, the administration relented and the former AICC president reached Sitapur guest house in his own vehicle on his way to Lakhimpur Kheri.

At the PAC guest house, Rahul Gandhi, Priyanka Gandhi other party leaders stayed for nearly one hour before setting off for their journey to Lakhimpur.

With the Lakhimpur incident coming ahead of the election in Uttar Pradesh early next year, opposition parties smelled a chance to corner the BJP.

Delhi chief minister Arvind Kejriwal also spoke to the family of Nachatar Singh over phone and expressed deepest condolences and assured all help to the bereaved family.

SP sources said Akhilesh Yadav will first go to the home of farmer Nachatar Singh at around 1 pm followed by a visit to the house of Raman Kashyap and end with a trip to house of Lovepreet Singh in Palia tehsil.

The BSP general secretary will set out for Lakhimpur from his Lucknow house at around 10 am on Thursday to meet families of the victims of the violence, a party statement said.

Talking to the press at the airport, Rahul Gandhi said he or Priyanka being sent to jail was irrelevant as the main question was “people being crushed by criminals”, referring to the Lakhimpur Kheri episode.

“Those who should have been in jail are not being put in jail. We are being stopped from meeting the aggrieved families of the farmers,” he said.

He also hit out at the UP government after he was not allowed to exit the Chaudhari Charan Singh airport, where a group of CRPF personnel were seen preventing his movement out of the airport, despite permission being granted to visit Lakhimpur Kheri.

Unable to move out of the airport, Gandhi along with Channi, Baghel and Deepender Singh Hooda, staged a sit-in inside the airport and said they would not end their 'dharna' until they are allowed to go to Lakhimpur.

“Until they allow me to go, I will sit here. Farmers are being oppressed and looted, and the farmers understand this,” he said, adding “everybody knows for whom these laws have been made”.

Priyanka Gandhi had been under detention since Monday morning.