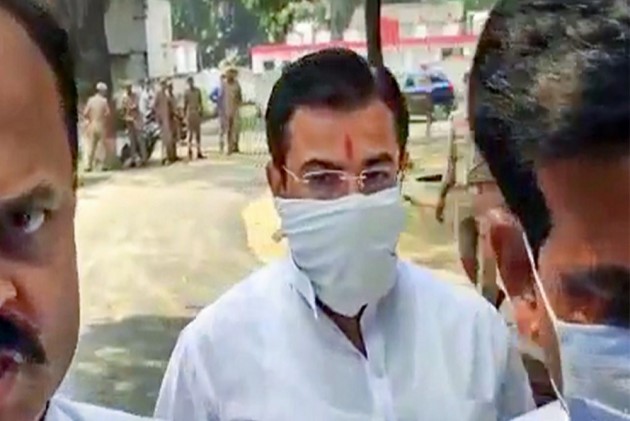 A court in Lakhimpur Kheri in Uttar Pradesh late on Saturday night sent Ashish Mishra, son of Union Minister of State for Home Ajay Mishra, to 14-day judicial custody in connection with the October 3 violence.

After around 12 hours of questioning in connection with the violence in which eight persons including four farmers were killed, a medical team examined Ashish Mishra in the crime branch office, after which he was taken for production before a judicial magistrate, who sent him to custody, senior prosecution officer SP Yadav said.

He said an application for police remand of Ashish Mishra was submitted to the judicial magistrate who fixed it for hearing at 11 am on Monday.

Farmer leaders and opposition parties had been demanding Mishra's arrest but the minister and his son had denied the allegations.

Two BJP workers and their driver were  allegedly lynched by angry farmers in the incident. Local journalist Raman Kashyap also died in the violence, which has triggered a political storm and put the BJP government on the back foot in poll-bound Uttar Pradesh.

Farmer leaders and opposition parties had been demanding Mishra's arrest but the minister and his son had denied the allegations.

Two BJP workers and their driver were  allegedly lynched by angry farmers in the incident. Local journalist Raman Kashyap also died in the violence, which has triggered a political storm and put the BJP government on the back foot in poll-bound Uttar Pradesh.

Mishra appeared before the SIT at around 10.30 AM after a second summons was served to him the previous day when he did not turn up for interrogation. He was arrested at around 11 PM after being grilled by the SIT at the crime branch office in the Police Lines.

Security personnel were deployed in strength and barricades put up in the area around the police line.

Mishra was kept in the interrogation room and was produced before the court after medical examination, police sources said.

Aged around 35, Ashish Mishra looks after the political activities of his father in his Kheri Parliamentary constituency.

While his son was facing questioning by the SIT, Ajay Mishra was in his MP’s office in Lakhimpur city with lawyers and later came out to calm his supporters, who had assembled in large number outside the house and were shouting slogans in favour of him and his son.

The Minister told them that Ashish was innocent and would come out clean.

The Supreme Court had on Friday on questioned the non-arrest of the accused, directed preservation of evidence and mulled transferring the probe to another agency.

Without mincing words, a bench headed by Chief Justice N V Ramana had said, the law must take its course against all accused and the government has to take all remedial steps in this regard to inspire confidence in the investigation of brutal murder of eight persons.

Punjab Congress chief Navjot Singh Sidhu ended his "silent protest", which he started at 6.15 PM on Friday outside the home of Kashyap in Nighasan tehsil, after the minister's son turned up for questioning.

Lovepreet Singh of Palia village of Lakhimpur was among those who died in the violence.

Earlier in the day, the Samyukta Kisan Morcha (SKM), which is spearheading the agitation against the Centre's three farm laws, alleged that the violence was held under a pre-planned conspiracy and demanded the arrest of the minister and his son.

The farmer unions said if the government does not accept their demands by October 11, they will take out a 'Shaheed Kisan Yatra' from Lakhimpur Kheri with the ashes of slain farmers.

The SKM also gave a call for a “rail roko” protest across the country from 10 AM to 4 PM on October 18 and a “mahapanchayat” in Lucknow on October 26.

Ajay Mishra should be “dismissed from the cabinet and arrested on charges of spreading disharmony, murder and conspiracy. He is also protecting the culprits in the case”, SKM leader Yogendra Yadav alleged during a press conference in Delhi.

“His son Ashish Mishra and his associates, who have been accused of murder, should be arrested immediately,” he said.

Attacking the Uttar Pradesh Government over the handling of the probe in the Lakhimpur Kheri incident, Samajwadi Party chief Akhilesh Yadav alleged it was giving "bouquet" to culprits instead of bringing them to book.

"The way farmers were crushed, now preparations are on to crush the laws. This government has pulverised the Constitution.

"You have seen how a vehicle ran over farmers who were fighting for their rights. The guilty persons are yet to be caught. Instead of giving summons, a flower bouquet is being given. The summon is only in name, and (in reality) 'samman' (honour) is given," he told reporters in Lucknow.

SKM leader Yogendra Yadav said an “antim ardas” (prayer meeting) will be held on October 12 at Tikonia, Lakhimpur Kheri to pay tribute to the four farmers and the journalist killed in the incident.

“All farmer organisations should organise prayer meetings at their places on October 12,” he said and appealed to citizens to light candles outside their house on that evening.

"If the government does not accept our demands by October 11, we will take out a 'Shaheed Kisan Yatra' from Lakhimpur Kheri with the 'asthi' of slain farmers," he said.

Yadav said that on Dusshera on October 15, the SKM will burn the effigies of the prime minister and the home minister to protest against the violence.

Members of the Indian Youth Congress (IYC) staged a protest in the national capital.

The protesters, led by IYC national president Srinivas BV, assembled at Sunehri Bagh Road to march towards Union Home Minister Amit Shah's residence on Krishna Menon Marg, but were stopped by the police, which erected barricades at the protest venue.

Meanwhile, a protest was also held here demanding justice for Shubham Mishra, one of the BJP workers killed in the incident.

However, Bharatiya Kisan Union leader Rakesh Tikait said that he doesn't consider those who killed BJP workers in Uttar Pradesh's Lakhimpur Kheri as culprits as they only reacted to SUV running over protesters.

"The killing of two BJP workers in Lakhimpur Kheri after a convoy of cars mowed down four farmers is a reaction to an action. I do not consider those involved in the killings as culprits," Tikait said in reply to a question.

A nine-member team headed by by the SIT team headed by Deputy Inspector General of Police (Headquarters) Upendra Agarwal has been formed to investigate the FIR lodged against the minister's son and others in the Lakhimpur Kheri violence.

After two men were arrested on Thursday in the case, police had put up a notice outside Ashish Mishra's house asking him to appear before it.