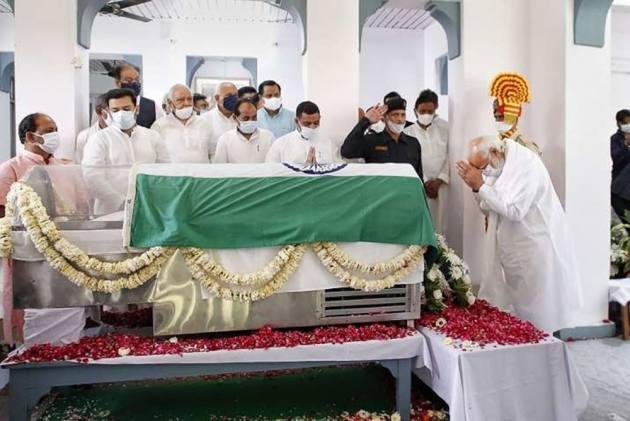 Former Uttar Pradesh Chief Minister Kalyan Singh, popularly known as “Babuji” in UP politics, died on Saturday night at the ICU of the Sanjay Gandhi Post Graduate Institute of Medical Sciences in Lucknow, after battling age-related ailments at the facility for nearly one-and-a-half months.

The last rites of former Uttar Pradesh chief minister Kalyan Singh will be performed on Monday at Rajghat in Narora of Bulandshahr district with full state honours, officials here said.

The mortal remains of the BJP leader, which were kept at Ahilya Bai Holkar stadium here, will be taken to his native village Madholi at 9.30 am, and from there they will be taken at Rajghat in Narora, they said.

He said that the veteran BJP leader would be considered among those leaders of his generation who had deeply impacted Indian politics of his era.

Paying homage to Singh at the stadium, where thousands queued up to pay their last respects, Adityanath said "such was Singh's love for Lord Ram that he did not care about the lure of office when he had to choose between the two".

Singh, who also served as the Rajasthan governor, was admitted to the Intensive Care Unit of the SGPGI in a critical condition on July 4.

He died due to sepsis and multi-organ failure, the hospital said.

Singh was the Uttar Pradesh chief minister when the Babri mosque was demolished by a mob of "karsevaks" in Ayodhya on December 6, 1992. Along with BJP veterans L K Advani and M M Joshi, he was among the 32 people acquitted in the demolition case in September last year.

A Lodhi leader, he was instrumental in the rise of the BJP to power in Uttar Pradesh in the 1990s.