In the document, the government of India claims that Narendra Modi Government erased the pain of the people by removing the provisions of Article 370 from Jammu & Kashmir and Ladakh. 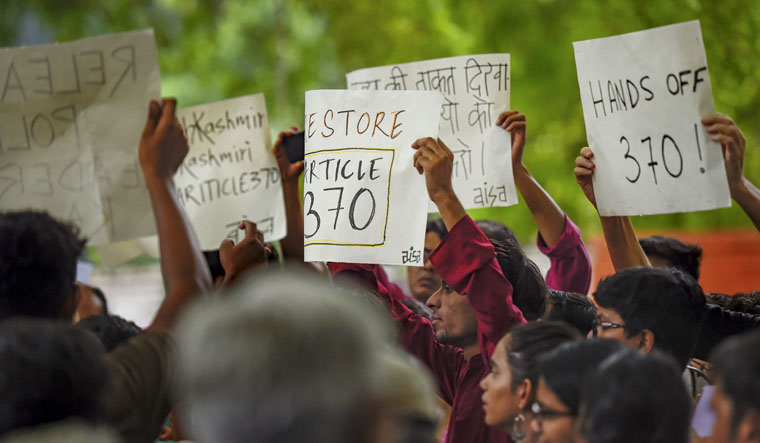 In a latest document titled “the dream of one nation, one law, one symbol fulfilled, after effective removal of the provisions of Article 370” the government of India says it has withdrawn security from all separatist leaders and has frozen 82 bank accounts of the separatists.

The document released by the Ministry of Information and Broadcasting claims after the removal of article 370, the support base of separatists is diminishing.

“In 2018, 58; in 2019, 70; and in 2020, six leaders of Hurriyat were taken into custody. The security provided to the Hurriyat leaders at government expense has been withdrawn and 82 bank accounts of separatist were frozen,” the document says. It claims “the incidents of terror have significantly declined and there is a new found atmosphere of peace and security in the valley.”

The document takes credit of all Panchayat, BDC polls but, is silent about Assembly elections not being held in J&K for past four years

However, in the document, the government of India claims that “Narendra Modi Government erased the pain of the people by removing the provisions of Article 370 from Jammu & Kashmir and Ladakh.

“Now it has been brought at par with other states by bringing it into the mainstream. For almost two years now, this region has embarked on a new journey of development. 170 Central laws, which were not applicable earlier, have now been made applicable in this region. At present all the Central laws are applied in the UT of Jammu & Kashmir,” it adds.

“Jammu and Kashmir was treated differently from other States of India. This kept the state away from the mainstream. As per the provisions of Article 370, the Parliament had the right to enact laws with regard to defence, external affairs and communication for Jammu & Kashmir; but to make laws related to any other subject, the Centre had to seek the consent of the state. The Parliament of India could enact laws only on limited subjects in connection with Jammu and Kashmir. Due to Article 370, most of the sections of the Constitution of India did not apply to the State of Jammu and Kashmir,” the document claims. However, the fact is over the years scores of central laws were made applicable to Jammu and Kashmir in spite of Article 370 in vogue.

“Now the local residents and the residents of other states, enjoy the same rights. Out of the 334 State laws, 164 laws have been repealed and 167 laws have been adapted, according to the Indian Constitution.”

According to the document, after the “freedom from Article 370, elections of Gram panchayats and Zila panchayats were conducted successfully.”  However, the document is silent about the Assembly elections which the Election Commission of India has not conducted here since June 2018 when the PDP-BJP government fell.