The former Uttar Pradesh minister, Azam Khan, was named in the FIRs lodged in connection with the alleged forcible acquisition of land for Mohammad Ali Jauhar University, of which he is the founder and Chancellor. 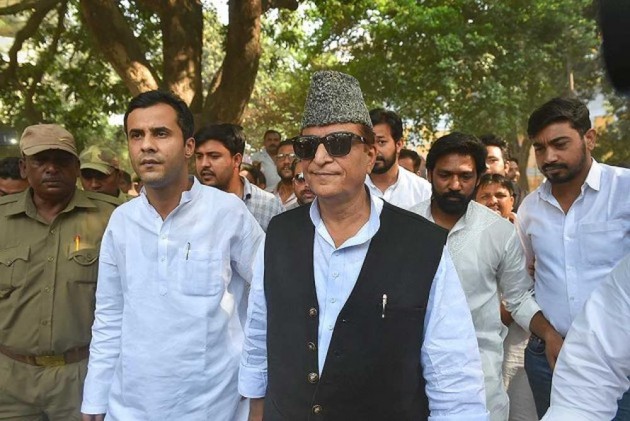 Samajwadi Party MP Azam Khan's name has been put on an online list of land mafias by the Rampur district administration following FIRs registered against him.

This has prompted a strong protest from his party which has subsequently raised the issue in UP Legislative Council alleging that he is being framed in "fake" cases.

The state BJP government dismissed the SP's allegations, asserting it is treating everyone the same and the action is not driven by any political vendetta.

"The name of the Rampur MP has been put on the list of anti-land mafia portal of the state government on Thursday after FIRs were lodged against him on land-grabbing charges," Additional District Magistrate (Administration) JP Gupta said.

"The listing was done by SDM Sadar," he said.

The former Uttar Pradesh minister was named in the FIRs lodged in connection with the alleged forcible acquisition of land for Mohammad Ali Jauhar University, of which he is the founder and Chancellor.

District Magistrate A K Singh said that the "farmers had claimed that Azam Khan had acquired their land for Jauhar University through coercion".

"The name of those who have acquired someone's land with alleged criminal acts and continue to have possession over it are included in the list on the portal," the DM pointed out.

The Samajwadi Party, however, alleged that the move was a conspiracy by the Rampur District Magistrate to defame Khan and the university.

SP president Akhilesh Yadav has constituted a 21-member committee, led by the leader of opposition in the Legislative Council Ahmad Hasan, to "probe" "fake cases" lodged against Khan in Rampur.

Leader of the Opposition Ahmad Hasan raised the issue in Uttar Pradesh Legislative Council and said, "Nearly a dozen cases have been registered against senior SP leader Azam Khan. The most painful thing is that he has taken land for building a university and not for any personal gains. In which direction is the government going? Azam Khan is a land mafia?"

Leader of the House and Deputy Chief Minister Dinesh Sharma termed the SP's allegations as baseless.

"The government is treating everyone in the same manner, and it is not an act of vengeance.

"The allegations which are levelled against the government are totally baseless, and do not have any link with the policy and intention of the government," Sharma said referring to the cases against Khan.