The government says those arriving from outside Leh have tested positive in large numbers and a new wave is infecting youth and children in the region. 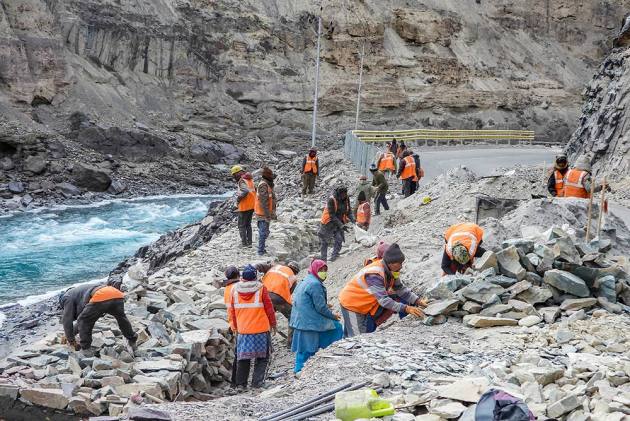 The government in the Ladakh region today expressed concern over the growing number of Covid-19 cases in Leh district especially among non-local labourers inducted by the Border Road Organization (BRO) in Leh.

A large number of labourers are being transported by contractors in the mountainous region for completion of the development projects. The Ladakh government has asked the BRO to restrict the induction of non-local labourers.

The government said those arriving from outside Leh have tested positive in large numbers and a new wave is infecting youth and children in the region. The government has made it mandatory for local passengers arriving at Leh airport to undergo the RT-PCR test. The passengers would be in quarantine until their reports are out.

Sense Of Normality In Kashmir Is A Myth, Says Yashwant Sinha-Led Group’s Report

According to the government spokesman, the chairman Ladakh Autonomous Hill Development Council (LAHDC) Leh, Tashi Gyalson, convened a meeting with the health department, para-military, police and district administration officials Friday expressing concern over the rise of Covid-19 cases in Leh.

“The chief medical officer in Leh briefed the meeting on the current scenario and the steps taken by the health department in containing Covid positive cases in the district. He apprised the officials of the alarming situation of the surge in Covid positive cases, especially among non-local labourers inducted by the Border Road Organization in Leh,” the spokesman said.

He said the district administration had conducted an inspection of the BRO quarantine facility centres and found them in unhygienic conditions.

“The Chief Executive Councilor (CEC) directed concerned BRO officials to restrict the induction of non-local labourers for the time being until further notifications are out. He also impressed upon them to manage existing labourers by providing proper Covid testing facilities and basic requirements at their concerned quarantine centres,” the government spokesman said.

During the meeting the Medical Superintendent of SNM Hospital Leh, Dr Nurzin, said those arriving from outside Leh have tested positive in large numbers in recent times. She said the new wave is infecting youth, especially the paediatric population in the region. Keeping the spread of infection in mind, the CEC made it mandatory for local passengers arriving at Leh airport to undergo the RT-PCR test.

Of 198 positive cases reported during the last 24 hours, 183 cases were reported from Leh only making it Covid-19 hot spot. The remaining 15 positive samples of Covid patients were received from Kargil. The total fatalities in Ladakh have reached 135, out of which 91 were reported from Leh and 44 from Kargil. The total number of Covid-19 active cases in the Ladakh region has touched 2,041 including 1,939 in Leh district and 102 in Kargil district.