Though the vehicles carried people who looked like civilians, there is a very strong possibility that some Chinese soldiers were also among them, locals said 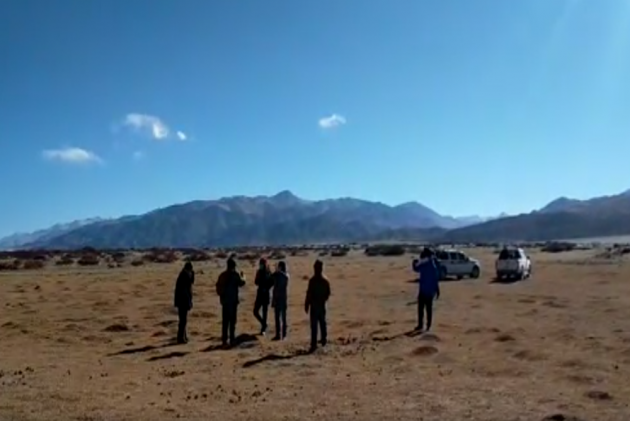 The Chinese reportedly raised objections to the local nomads allowing their livestock to graze in the area, but after strong protests by local authorities and other nomads, the went back.

China Carrying Out Construction In Tibet; India Ready For Any Eventuality: Bipin Rawat

He said for about three years local nomads have not been taking their livestock to Kakjung area for grazing due to varied reasons but this year some local nomads had put up tent there.

"After a tent was put up near the border, locals across the border started objecting to it. The Chinese said they will face problems in letting their livestock graze in the area. They threatened our nomads who retreated from the area and communicated the incident to local authorities and other locals," Ishey said.

A video which has gone viral on social media shows Chinese vehicles entering the Indian territory and rushing back after strong protests were staged by the sub-district magistrate and other locals.

Some locals say though the vehicles were carrying people who looked like civilians, there is a very strong possibility that some soldiers of the People’s Liberation Army (PLA) were also among them, which they say has been regular occurrence for the past few years.

Ishey further said that about three years back livestock in the neighbouring Chushul block had died due to a contagious disease post which locals stopped moving close to the border.

At the moment, it is grazing season in Ladakh and nomads take their livestock to the few remaining grazing lands available in the area. However, this year some locals decided to take their livestock to Dokbuk near Kakjung but the Chinese started objecting to it. Chinese locals reportedly told Indian nomads that since they have not been visiting the area for the last three years, they shouldn’t do so now and that if they did, it would create problems for them.

After the incident was reported back to the authorities, locals said the Indian Army and the Indo-Tibetan Border Police personnel posted there, also joined the others in confronting the Chinese locals, after which they returned.

Konchok Stanzin, who represents the Chushul constituency, located along the Line Of Actual Control (LAC), said there is nothing surprising about this incident.

"Intruding into Indian territory and claiming it their land, is now a regular act of the Chinese Army and its establishment. They regularly harass and intimidate our nomads who now fear going near border for grazing their livestock and in the process the Chinese have taken over a large part of our land. Chinese nomads are being provided all the facilities and are encouraged to move to the border but our authorities are consistently failing local nomads," said Konchok.