'What can I say about the problems we are facing in Kashmir where there is no electricity, petrol, diesel, kerosene oil and shortage of daily use food items,' he said at a book release 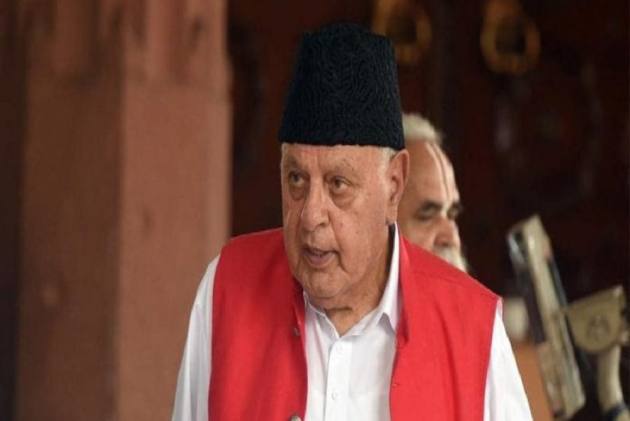 He also expressed hope for the success of coronavirus vaccines and encouraged people to maintain harmony to ensure prosperity and development in the region.

“The Prime Minister is saying 5G is coming in India while we are deprived of 4G (mobile internet service). May he come and live here after leaving the chair and see how we are living under 2G (service),” Abdullah, the former chief minister of the erstwhile state, said at a book release function here.

The 4G mobile internet service was snapped across Jammu and Kashmir in August 2019 following revocation of special status and bifurcation of the erstwhile state into two union territories.

While the service was restored in two districts, Udhampur in Jammu and Ganderbal in Kashmir, after over a year, it is still suspended in rest of the 18 districts.

“Students are sitting in their homes and getting education through the internet and the businessmen are also dependent on internet connectivity. My request to the prime minister is that if you are saying this place is on the path of development, give us 4G for the sake of God so that we too can benefit and our children move forward,” Abdullah said.

He said attention is required to be given towards it.

“There is a talk of Rs 28,000 crore package. First, let us know what happened to the earlier Rs 80,000 crore package and where the money had gone. See our condition and had there been no army, the Srinagar-Jammu national highway would have remained closed for one year,” the NC leader said referring to the restoration of the highway by Border Roads Organisation (BRO), which constructed a bailey bridge near Kela Morh to restore traffic on the strategic highway after a portion of the road caved-in on January 10.

Abdullah said people in Kashmir are faced with a lot of problems amid sub-zero temperature.

“What can I say about the problems we are facing in Kashmir where there is no electricity, petrol, diesel, kerosene oil and shortage of daily use food items. Jammu is the door to Kashmir and it is pathetic that former prime minister A B Vajpayee promised a rail link (between Kashmir and rest of the country) by 2007, which was revised to 2022 by this regime. Hope it would not extend to 2040 when I will be no more,” he said.

Abdullah said he is advising his brother Mustafa Kamal not to travel by Jammu-Srinagar national highway in view of the lurking threat of shooting stones from the hillocks overlooking the highway from Udhampur onwards.

“I am not doing any politics. This is the present-day condition in J&K. Yesterday, I received the New Year greeting card from Delhi Chief Minister and five days back a friend's letter from abroad dispatched in November last year. I telephoned him and requested him not to post any letter in future,” he said.

He said the situation is no different in Jammu even as the present regime promised 24X7 electricity to consumers.

Referring to the outbreak of the Covid-19 pandemic, he said the virus has brought the world to its knees and showed people power of the almighty.

“People today are afraid of handshakes and hugging each other as thousands are still dying on a daily basis in various parts of the world. Vaccine has been found and only time will tell about its efficacy but I am praying for its success so that the situation gets normal,” he said.

He, however, expressed surprise that some people were not adhering to the SOPs and moving around without masks, urging them not to lower their guard.

Hailing the contribution of Choudhary for the upliftment of his community, he said Gujjars are still facing poverty and disease and need to be empowered economically and educationally.

He asked the people to adopt the philanthropist approach and extend a helping hand towards the needy, irrespective of their creed, caste and religion.

He urged the trust to translate the released Urdu biography of Choudhary into other languages, especially Hindi and said “they think Urdu is a language of Muslims but do not know this is not the Muslim''s language alone. This is one of the languages in the country.”

“We will die but the language (Urdu) will remain. It is the identity of India,” Abdullah said.