No Option 'But To Become Terrorist': PMC Depositors Protest Outside RBI Office

The PMC Bank has been put under restrictions by the RBI after an alleged fraud of Rs 4,355 crore scam came to light. 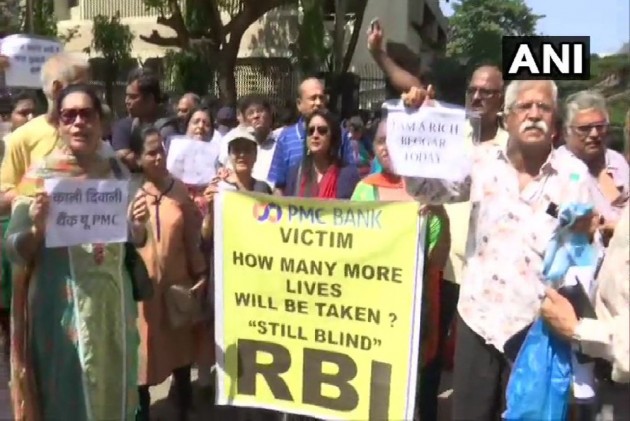 Several depositors of the Punjab and Maharashtra Cooperative (PMC) Bank protested outside the RBI's office in Mumbai on Tuesday, demanding an assurance that their money deposited with the scam-hit bank was safe.

They also demanded that the PMC Bank be revived so that they could withdraw their money.

The PMC Bank has been put under restrictions by the RBI after an alleged fraud of Rs 4,355 crore scam came to light following which the deposit withdrawal was initially shockingly capped at Rs 1000, causing panic and distress among depositors.

Subsequently, the withdrawal limit was raised to Rs 40,000 by the Reserve Bank of India (RBI).

Around 200 customers gathered outside the RBI's office in the Bandra-Kurla Complex on Tuesday and said they want that their accounts with the PMC Bank be made operational.

Later, a five-member delegation of the depositors met the RBI officials and put forth their grievances and demands.

"The bank can be revived because the probing agency has attached more assets of the accused than the loans given. The bank has become a sinking ship now, but we want that it should be restarted immediately," a depositor, Satish Thapar, told PTI.

He said the depositors' current and savings accounts with the PMC Bank should be activated with immediate effect so that "they can have their bread and butter".

"We want the RBI to come forward and issue a statement that our money is safe," he said.

Thapar said when the former prime minister (Manmohan Singh) can speak on the matter, why not the current PM (Narendra Modi).

"Around 16,000 account holders are suffering but the government is mum on the issue. Such a situation will leave us with no other option but to become a terrorist," he said.

Another account holder Manoj Agarwal said, "Around six people died and we don't know how many people more are in depression. We always heard Modiji's 'Man ki Baat' but now who will listen to our voice?"

The crisis at the bank is being attributed to loans given to realty player Housing Development Infrastructure Ltd (HDIL), which were allegedly hidden from regulators' scrutiny, turning non-performing assets.

Five persons, including HDIL promoters, have been arrested in the case.