Sonam Wangchuk speaks on climate change, its effects on Ladakh, #Ilivesimply movement and how to leave the earth as a habitable planet for future generations 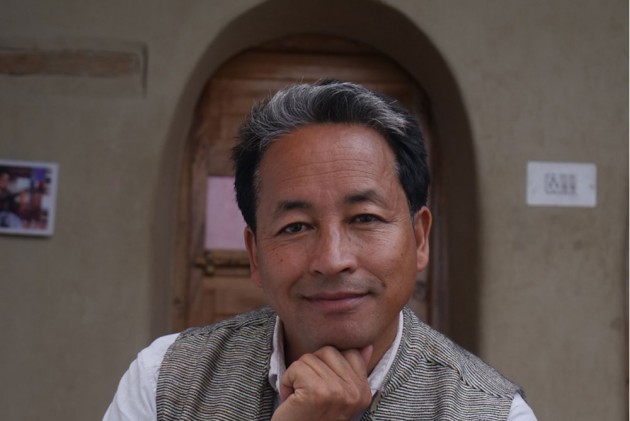 Sonam Wangchuk calls himself an 'education activist," but the Ramon Magsaysay Award winner is one of the most popular climate warriors in India. The Students' Educational and Cultural Movement of Ladakh (SECMOL), which he helped establish in 1988 stands testimony to these facts. This is where he tries to make children problem solvers, particularly in environmental fields. For him, the mantra is “first understand then solve problems”. He found time for a conversation with Jayanta Oinam.

Something to warm up, anything on Ladakh and climate change?
We, in Ladakh, have been doing our bit, about being nature-friendly, adapting to the changes and so on. And not only in our times but since time immemorial, in a place like Ladakh, you cannot but be in harmony with nature. It's a survival issue also, where sources are so little. Also, in the past 30 years, I have been trying to make education more relevant and to the times. Because, our education system of today is from the times when we thought production and consumption is the end of it. Now we are seeing the effects of that. So things should change. Therefore at our school and at institutions we work, we try to make children problem solvers, particularly in environmental fields. First, understand then solve problems. So that gave birth to solar heated mud buildings, with which we built schools. Using water very conservatively and using greenhouses to grow things and then of late, the ice stupas – artificial baby glaciers. We have been thinking that we could go on doing little solutions like this but the effects of climate change are becoming bigger and bigger, particularly in the mountains.

How much has changed, say in these last three decades?
Ladakh has changed a lot since the 30 years or so when we started things. Flash floods are almost frequent phenomena now. They are followed by drought. That's when we thought that we shouldn’t just be local, acting local alone. We also need to act global and connect globally. Some of these problems will not be solved locally. And we thought if mountain people who are like the first victims of climate change, give a sincere call, like an SOS call to the world, to please change people’s behaviour or as I say, "please live simply so we may simply live,” maybe there will be some impact. Once a trend sets in, then others may also join in.

That’s how the #Ilivesimply movement started?
Yes. We thought we should give a platform where people from all over the world, particularly in big cities, and particularly young people could find a cause or at least get sensitised about the issue. And help them feel that they can also do something. For that reason, because it's the youth, the next generation, we thought we should do it in a fun, innovative and interesting way. #Ilivesimply movement is a crowdfunding campaign. People know crowdfunding, but they know it as something where one pays money for a cause or for products and so on. This is something where you contribute, but not money. In fact, you contribute pledges to change your behaviour to make the earth a still livable for people, particularly those who are the early victims like us in the mountains.  And we chose Mahatma Gandhiji's 150th birth anniversary. His thoughts were ahead of his times, and they make much more sense today. Living simply 70 years ago was a choice of humility, maybe; but today it’s about survival. We thought that could be a nice chord to connect with the young people around the world.

How does it work?
We devised it in a manner so that people could contribute in sort of dollar terms, in equivalent actions, in dollar equivalent actions. Or sometimes I like to call it ILS dollars, or green dollar. It's like a new currency in a way, which is based on people doing good to make the planet more livable. In less than a month, people have contributed pledges worth more than a million dollars.

Tell us something about The Last Game?
We look forward to collaborate and partner with all like-minded people. So, we immediately said, let's partner, and let's do things together. And sports stars are always good at connecting with young people. So, Viacheslav ‘Slava’ Fetisov coming to Ladakh and doing things together was a natural thing to happen. And hopefully, we can do it every year.

How is the Indian government doing in this front?
The Indian government has been taking some lead in several environmental initiatives, like the international solar alliance, many green initiatives in schools, lots of river reservations projects. I find it very impressive, especially because the voters in our country are not sensitive to these issues. I am actually impressed with Narendra Modi on this particular thing that even when people are not asking for it, he goes on to promote green initiatives, to cut down emission. It's a great opportunity for India. India can take a leadership role, particularly because of its sheer population. If 1.3 billion people or the government of that size change even a small policy, it will make a huge impact.

During The Last Game banquet, you mentioned about making Ladakh a zone of peace. Please shed some light on it.
Ladakh is a hot battlefield, thanks to three hostile neigbhours – India, Pakistan and China. All the wars have been fought here. I gave a call for 'peace with nature, peace with neighbours'. Let’s make Ladakh a zone of peace. Opening Ladakh for large scale mining and industry as a UT will add to our ecological disaster.

What does the future look like for Ladakh?
Ladakhi life is very fine-tuned with nature. We don't want it to become like cities. Let Ladakh change the world rather than the world change Ladakh. The current state of the world needs more and more places to become like Ladakh.