The BJP’s anti-Englishism combined with its drive to privilege Hindi and the Hindi-speaking (people and regions) over other linguistic groups, has always aroused deep antagonisms in Tamil Nadu 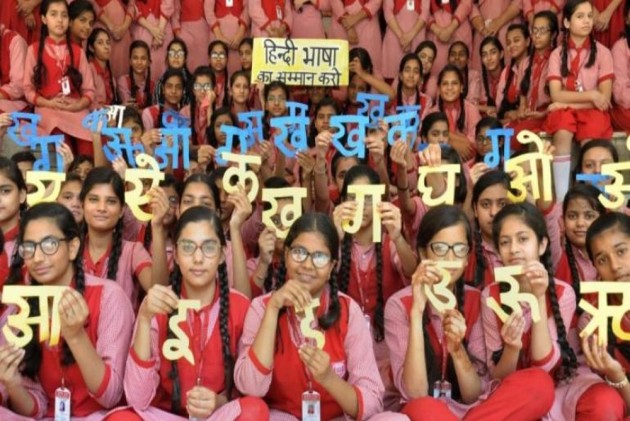 On May 25, two days after the counting of votes that was to bring in Modi Sarkar 2.0, DMK President M K Stalin said, “Gone are the days when it was believed that only Hindi-speaking states make India”.

As if to prove that he had not spoken a day too soon after the DMK-led alliance won 37 of the 38 seats Lok Sabha seats in Tamil Nadu, the draft New Education Policy 2019 released on May 31 wants that Hindi should be made a mandatory third language in schools. The Hindi-centric recommendation has come from an expert committee headed by former ISRO chief K Kasturi Rangan.

The report unleashed a dam burst of protests in Tamil Nadu. Tamil politicians across the spectrum are protesting in one voice against any attempt to impose Hindi. Although the ruling AIADMK is a BJP ally, state school education minister KA Sengottaiyan said that the state will shun the new policy. "Tamil Nadu will follow only two-language policy,” he declared.

Amid Controversy Over Teaching Hindi, Javedekar Says No Decision Taken Yet

The draft NEP proposal -- that "children will now be immersed in three languages early on, starting from the Foundational Stage onwards" – is yet to become policy, as Union ministers pointed out in a bid to puncture the protests. Few in Tamil Nadu are taken in by that response, as the state has long opposed moves to give Hindi greater prominence than other Indian languages. The first anti-Hindi protests, which erupted in 1937, went on till 1940. In 1965, the issue flared again. At least 70 were killed in the ensuing violence, which ended after then Prime Minister Lal Bahadur Shastri’s assurance that Hindi will not be imposed on non-Hindi speaking states and English would continue as a link language.

If the Centre’s protestations fail to carry conviction in the state, that is because the BJP is seen as a party of the Hindi heartland committed to pursuing the policy of “one country, one culture, one language” with little regard for the sensitivities of the southern, and eastern, states. The BJP’s anti-Englishism combined with its drive to privilege Hindi and the Hindi-speaking (people and regions) over other linguistic groups, that are better educated and have flourished without it, has always aroused deep antagonisms in Tamil Nadu and also in the south, east and northeast.

More threatening than this political drive, it is the BJP’s utter inability to grasp that, although large sections in these regions have learned and are schooled in Hindi, it is not central to their lives. For millions here, Hindi represents language (and cultural) imperialism rooted in the political domination of the Hindi-speaking. The heartland states are not the best examples of good education. Nor are they aspirational in the sense of employment, social mobility and economic advancement. Every year, hundreds of schools in the Hindi states fail to record a single pass in board exams; and, lakhs of Hindi-speaking students fail in Hindi at all levels. The rampant copying in examinations is seen as a symptom of the abysmal levels of education in most Hindi-speaking states.

Thus, the educated and economically advanced do not associate Hindi with ambition or achievement beyond political office; and, Hindi imperialism is seen as an attempt by the “backward” north to rule over the south and level down the non-Hindi person to the social, educational and economic status of the Hindi-speaking. And, this at the expense of the non-Hindi states and people.

At the same time, the accusation that the “Madrasi”, particularly the Tamil, prefers English imperialism to Hindi imperialism is not without basis. The Tamil’s fluency in English enabled his advance and success during British rule and after Independence. It made him more mobile and allowed him the desired education in India or abroad; and propelled him to an advantageous position over the heartland people. English made the presence of the Tamil official, diplomat, academic or public figure more felt and effective on the national stage and in forums abroad compared to the only-Hindi speaking person. Tamils cashed in on their strength in English and the benefits it brought to Tamil Nadu and its economy; and, their own status beyond Tamil Nadu.

Tamil Nadu boasts of some of the world’s top IT professionals who bag bulk of the H1-B visas to the US. Tamil Nadu and Andhra Pradesh account for a huge chunk of Indian knowledge workers abroad; and, are in demand in the US, the UK, Australia and Europe. Long before job opportunities became available on the present scale in Tamil Nadu, English education paved the Tamils’ path to advancement in other parts of India and abroad. English came to mean opportunity, progress and success.

On an international scale, Hindi imperialism is less threatening than English imperialism. But to one subjected to Hindi imposition, it is more oppressive than the bigger imperialism of English – for the latter offers more options and opportunities, and opens new vistas and horizons.

The success of English and English-speaking Indians worldwide testifies that this language, and not Hindi, holds out greater promise of success for the aspiring. In contrast, imposition and linguistic parochialism can only hold back development, retard progress and oppress people. Over and above all these, in today’s world, language is a skill. If it is useful and serves their purpose, people will learn it. Not otherwise. As long as these hold true, Tamil Nadu will stick to “English ever, Hindi never".

(The writer is a political and foreign affairs commentator. Views expressed are personal)