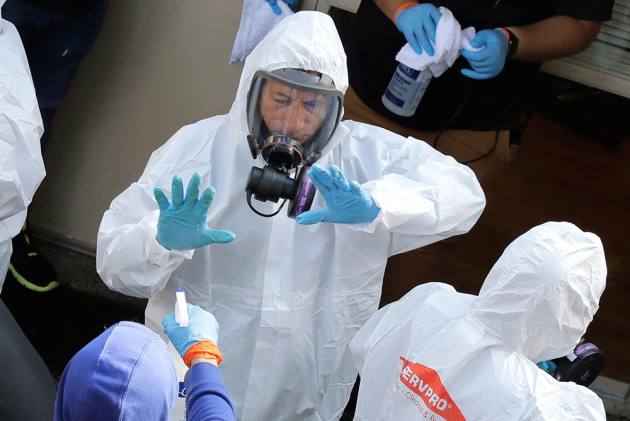 India has reported two deaths due to COVID-19 while the number of those infected by the virus has risen to 84.

The pandemic has triggered panic and worry across the world. The virus, which first surfaced in China in December last, has now killed more than 5,000 people, with cases around the world topping 134,000.

In India, the authorities and government have stepped up efforts to contain the spread of the virus. Educational institutes in the national capital and several states have been shut and the government has discouraged large gatherings.

Helpline Numbers For Coronavirus In All States, Union Territories Of India

The government has also announced a compensation of Rs 4 lakh for the family of those losing lives to coronavirus.

The World Health Organization declared Europe as the new "epicentre" for the global coronavirus pandemic, and warned it was impossible to know when the outbreak would peak. After China, countries like Italy, France, Iran and the US have been worst-hit by the virus, claiming hundreds of lives.

7:44 PM: Samples of four patients, one from Mumbai and three from adjoining areas, test positive for coronavirus: Civic officials.

6:28 PM: The Ministry of Home Affairs has announced that the Padma awards ceremony, which was scheduled for April 3, has now been postponed. The decision has been taken in view of the coronavirus outbreak.

The Ministry said the new date and time of the ceremony will be announced later.

6:00PM: Two persons who had recently returned from Dubai were confirmed to have contracted the coronavirus in Maharashtra's Yavatmal city on Saturday. It took the number of confirmed cases in the state to 22.

5:10PM: An Indian national in Rwanda has tested positive for the novel coronavirus, becoming the first confirmed case of COVID-19 in the east African country. The country's health ministry said that the Indian citizen arrived there from Mumbai on March 8.

5:06PM: A doctor couple, who returned from Saudi Arabia recently, has been quarantined for 14 days in their home in Assam's Barpeta district, officials said on Saturday.

4:45PM: "The number of coronavirus positive cases in India has risen to 84. Seven persons, who tested positive, including five from Uttar Pradesh and one each from Rajasthan and Delhi have been discharged after treatment," a senior health ministry official said.

4:40PM: Telangana Health Ministry says, "Two more suspected cases of coronavirus have been found; their samples have been collected and sent to National Institute of Virology in Pune. Test results are awaited."

4:15PM: More than 4000 people who had come in contact with 84 positive cases are under surveillance, says Health Ministry.

3:50PM: Apple is closing all of its stores outside China until March 27 in a bid to slow the spread of the coronavirus outbreak, CEO Tim Cook said.

3:40PM: All India Football Federation suspends tournaments, including I-League, till March 31 in wake of COVID-19 pandemic.

3:20PM: Home Ministry announced that Rs 4 lakh will be paid as ex-gratia to the family of the person who loses their life due to coronavirus infection, including those involved in relief operations or associated in response activities.

3:05PM: The government has decided to treat Covid19 as a notified disaster in "special one time dispensation" for the purpose of providing assistance under the State Disaster Response Fund (SDRF).

3:00PM: All schools, colleges, casinos, boat cruises, and disco clubs and other public spaces will remain closed till March 32 in Goa. However, Senior Secondary Certificate (SSC) and Higher Secondary School Certificate (HSSC) exams will be conducted as per schedule.

2:40PM: In West Bengal, all government, government- aided, and private educational institutions - schools, colleges, universities, madrassas, Sishu Shiksha Kendra and Madhyamik Shiksha Kendra will remain closed from 16th to 31st March. Board examinations will be held as per schedule.

2:06PM: Six to seven options,  including a curtailed IPL, were discussed during a meeting between team owners and BCCI, PTI reported quoting a BCCI source.

1:53PM: Civil Aviation Minister Hardeep Singh Puri on Saturday said so far nearly 12 lakh passengers coming from abroad have been screened for coronavirus at various airports across the country.

1:33PM: Another case of coronavirus was confirmed in Telangana taking the total number of those infected to two, Chief Minister K Chandrasekhar Rao said.

The patient with travel history to Italy has been admitted to the state-run Gandhi hospital in the city for quarantine purpose.

1:30PM:  In wake of COVID-19 outbreak, all the 16 jails in Delhi, including Tihar jail, have been put on alert. An isolation ward has also been set up in every jail.

1:25PM: Ivanka Trump, the First Daughter and senior advisor to US President Donald Trump, opted to work from home on Friday "out of an abundance of caution" after she personally interacted an Australian official who tested positive for coronavirus infection, the White House said.

1:22PM: "Three of the five coronavirus suspects who had escaped from Mayo Hospital, have returned. Police will be deployed outside the isolation ward," says Ravindra H Thakare, Nagpur Collector and District Magistrate:

1:19PM: Delhi Health Minister Satyendar Jain says, "N95 masks should only be used by healthcare workers or those who are displaying symptoms, not healthy people. We have also constituted teams to take action against hoarding and over charging (for masks and sanitizers)."

1:07PM: A Peruvian national and three Indians including a nine-month-old child have been admitted to an isolation ward of a government hospital in Kolkata with symptoms of novel coronavirus.

Five people, including an Italian couple and a Thai national, who were earlier admitted to the isolation ward, were discharged from the Beliaghata ID Hospital after testing negative.

1:05PM: The Indian Consulate in New York has launched a COVID-19 travel helpline, in in view of the New Delhi governments guidelines about travel to the country and suspension of all visas till April 15.

The helpline was launched to help people facing issues such as expiring American visas, denials of H-1B visas and Indian citizens with minor children who are US citizens having to travel back due to compelling reasons.

1:00PM: West Bengal government has sealed the state's border with Bhutan in the wake of novel coronavirus outbreak. The West Bengal Police, which mans the border gate on the Indian side in Jaigaon in Alipurduar district, stopped the movement of goods and travellers from India to Bhutan on Friday evening, according to an offcial.

12:50PM: In Himachal Pradesh, all government and private colleges and schools, Anganwadi centers and play-way schools to be closed till March 31, says  CM Jairam Thakur.

12:33PM: Mumbai Cricket Association has suspended all its cricket activities & tournaments till 31st March in wake of state government's advisory about coronavirus.

12:10PM: Twenty one passengers, who were stranded in coronavirus-hit Italy, were brought to Kochi in Kerala on Saturday following which they were shifted to Aluva hospital for investigation, PTI reported.

Several Indian passengers have been stuck in the European nation, despite having confirmed tickets.

11:33 AM: The number of novel coronavirus cases in the country rose to 83 on Saturday, which includes one death each from Delhi and Karnataka, the Union Health Ministry said.

11:00 AM: Five coronavirus suspects escaped from an isolation ward of Mayo Hospital. S Suryavanshi, Sub-Inspector Nagpur police station, said, "One of them had tested negative, reports of other 4 were awaited. We have traced them and they will be brought back to the hospital by the administration." They hd returned home without informing authorities, police said.

10:38 AM: The ongoing Australia v sNew Zealand ODI series and Australia's upcoming away series in New Zealand have been postponed amid growing COVID19 concerns.

10:32 AM:  China reported 13 new coronavirus deaths, taking the toll due to the disease to 3,189, while the confirmed cases climbed to 80,824 with 11 more infections, as the country witnessed a rise in imported cases, health officials said on Saturday.

10:15 AM: Tripura has imposed a ban on the entry of foreigners in the state as a precautionary measure to prevent the spread of Coronavirus.

10:12 AM: With two more persons testing positive for coronavirus in Maharashtra, the number of infected individuals in the state has gone up to 19, a health department official said on Saturday.

10:10 AM: Israeli Prime Minister Benjamin Netanyahu requested Narendra Modi to approve and allow the export of masks and pharmaceutical raw materials to Israel during his telephonic conversation with his Indian counterpart this week, according to a media report.

8:58 AM: Global software major Infosys vacated one of the buildings in Bengaluru after a team member was suspected for coronavirus.

8:54 AM: The US Embassy and Consulates in India have cancelled all visa appointments from March 16 in the wake of coronavirus outbreak.

8:46 AM: The Indian Institute of Technology (IIT) Delhi has suspended all academic, co-curricular and extra-curricular activities as part of preventive measures to prevent the spread of coronavirus in the campus.

8:43 AM:  The Pakistan government has taken a number of steps to contain the spread of the novel coronavirus, including closing the western borders with Iran and Afghanistan and banning all large public gatherings, as the number of confirmed cases has increased to 28 in the country.

8:10 AM: Schools, colleges, coaching centres, gyms, and cinema halls in Rajasthan to remain closed till March 30, as a precautionary measure amid Coronavirus pandemic. Board examinations that are underway will be held as per schedule.

8:05 AM: US President Donald Trump said Friday he would "likely" be tested soon for the novel coronavirus, although he stressed he is "displaying no symptoms."

8:02 AM: US President Donald Trump declared a national emergency on Friday, opening up access to up to USD 50 billion in federal funds to combat the fast-spreading novel coronavirus that has claimed 41 lives in the country.

7:56 AM:  Canada shut down Parliament and advised against all nonessential travel outside the country while Prime Minister Justin Trudeau governed remotely from his home, in self-imposed quarantine after his wife tested positive for the new coronavirus.

7:52 AM: All United Nations staff at its headquarters in New York were told Friday to work from home for at least three weeks due to the coronavirus outbreak unless it was essential for them to be present.