The Rajasthan political crisis continues even as Congress leaders met at Chief Minister Ashok Gehlot's residence today. Rebel leader Sachin Pilot has maintained he won't join the BJP, but that has only deepened the mystery over his next move 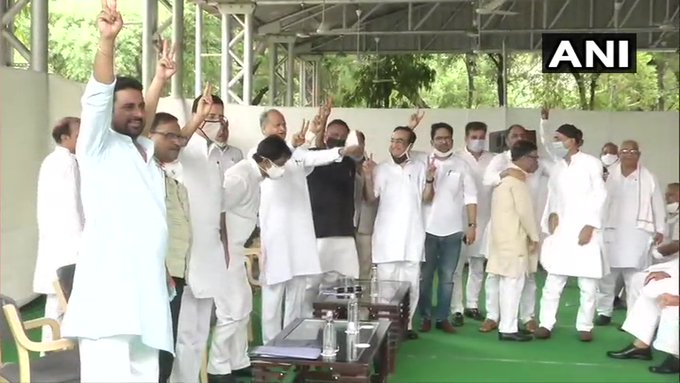 Rajasthan CM Ashok Gehlot with over 100 MLAs at his residence in a show of strength ahead of CLP meet
ANI/Twitter
Outlook Web Bureau 2020-07-13T11:09:46+05:30 Rajasthan Live Updates: Congress MLAs Taken To Jaipur Hotel; Party Calls Another Meeting On Tuesday

The rebellion of Rajasthan’s Deputy Chief Minister Sachin Pilot has created ripples in the political scene -- all the way from the state to Delhi. After Pilot claimed that Ashok Gehlot-led Congress government in the state was in minority, and claimed that he had the support of 30 MLAs.

Later, however, the disgruntled Congress leader said that he has "no plans to join the BJP”, keeping the journalists and observers guessing about his next move. Meanwhile, the Congress Legislature Party passed a resolution supporting Gehlot-led government.

Read All The Updates Here:

8:35 PM: Haryana’s Adampur MLA Kuldeep Bishnoi on Monday urged the Congress leadership to do everything possible to persuade Sachin Pilot.

“My appeal to the Congress high command is that the way Jyotiraditya Scindia left the party, it caused a big loss to it. Now, we are hearing such rumours about Sachin Pilot. If these are rumours, then there is no problem, but if this is true, then the Congress should do everything to persuade him,” Bishnoi said in a video message posted on his Twitter handle.

7:00 PM: "The Congress government has lost people's confidence. It should go in public interest. The government failed to keep its promises made to people," BJP state president Satish Poonia told reporters. Asked about speculations that the BJP may support the Pilot camp from outside,  Poonia said that "we have all options open" and a decision would be taken based on how the situation evolve and as per the directions of the central leadership.

#Rajasthan : Buses, carrying MLAs, leave from the residence of Chief Minister Ashok Gehlot after the Congress Legislative Party (CLP) meeting concluded. One of the MLAs says, "All is well." pic.twitter.com/shZGBXlHQN

3:17 PM: CLP meeting concludes at Gehlot's residence. MLAs are being transferred to a resort in buses.

3:10 PM: Five buses brought to CM Gehlot's residence where the Congress legislative party meet is approaching end. The MLAs are likely to be ferried to a resort. They are  likely to be put up at a resort in Jaipur till the issue with Pilot is resolved.

#Rajasthan : Buses seen outside the residence of Chief Minister Ashok Gehlot in Jaipur.

2:48 PM: As many as 107 MLAs are present at the Congress Legislative Party (CLP) meeting in Rajasthan's Jaipur, CM Ashok Gehlot's media advisor confirms to ANI.

2:46 PM: Ashok Gehlot and central observers are also discussing the option of parading around 109 MLAs supporting the government before the Governor once the CLP meeting ends.

2:43 PM: Congress leader Rahul Gandhi has spoken to both CM Ashok Gehlot and Sachin Pilot over phone to take stock of the developments in Rajasthan. Rahul and his sister Priyanka Gandhi Vadra are likely to speak to Gehlot and Pilot again in a bid to resolve the crisis. Gehlot has assured the central leadership of stability of his government, with or without support of Pilot and his loyalists.

1:28 PM: Crucial Congress Legislative Party (CLP) meet has begun at CM Ashok Gehlot's residence. Over 100 MLAs have turned up for the meeting.

12:35 PM: Congress leader PL Punia says “Sachin Pilot is now in Bharatiya Janata Party.” However, he later clarified that it was a slip of tongue.

It is clear in the video that question was asked about Scindia ji and my reply was about Sh Scindia and by slip of tongue I took Sachin Pilots’ name instead of Scindia. Mistake is regretted https://t.co/hYws6XefKX

12:20 PM: In a harsh reality tap amid the ongoing political crisis in Rajasthan, Pradesh Congress Committee President Sachin Pilot's posters were removed from outside the state headquarters premise on Monday.

12: 05 PM: "We have constantly been in touch with Pilot for the past 48 hours. It won't be proper to disclose publicly everything that was discussed," Surjewala said.

12:04 PM: "The CLP meeting will begin later today. We appeal Sachin Pilot and all MLAs to attend it. He or any other MLA who is not in Jaipur can inform Avinash Pande about unavailability or till when they can reach Jaipur to attend the meeting and we will be happy to factor that in. Ajay Maken, Avinash Pande and I have been speaking to all our MLAs since yesterday; we have discussed all the issues and we have sorted everything out. If anyone still has some other problem, they are welcome to come forward and tell us. We will sit and find a solution like a family," says Surjewala.

11:58 AM: "We respect Sachin Pilot, he is a member of our family. When a family member gets upset, he doesn't work to bring the family down. We appeal Pilot to come with an open mind and discuss all the issues," says the Congress leader.

11:56 AM: "The IT raids that have started since yesterday will not destabilise our government. The IT has come, the ED will also come but we will not let the BJP succeed," Surjewala says.

11:52 AM: "Because of personal differences it is not proper to weaken an elected government or help BJP. If there are differences, please come and talk. Under the guidance of Sonia Gandhi and Rahul Gandhi, we can sort out the differences and work together," says Surjewala.

11:50 AM: "In the past 48 hours, Congress leadership, several CWC members have been in touch with Sachin Pilot. We appeal to Sachin Pilot and all MLAs, there can be personal competition but it is our responsibility to  strengthen a democratically elected government," says Randeep Surjewala.

11:25 AM: Rajasthan Deputy Chief Minister Sachin Pilot has said he will not join the Bharatiya Janata Party. While the speculations are rife about his next move, a close aide of Pilot says he might float a new political party.

11:23 AM: Ashok Gehlot camp is pushing for disciplinary action against Sachin Pilot for his anti-party activities and skipping today's CLP meet.

11:10 AM: “Sachin Pilot was the rightful candidate for the post of Rajasthan CM but Ashok Gehlot took the charge, a conflict in the party began since then. What's happening today is the result of that conflict. The state government has lost the majority,” says Rajasthan BJP president Satish Punia.

11:00 AM: Over 90 MLAs at Rajasthan Chief Minister Ashok Gehlot's residence in Jaipur, for Congress Legislative Party meeting, ANI reported. The meeting is underway.

10:45 AM: After the IT Department conducted raids on close confidantes of Ashok Gehlot in Jaipur, Congress leader Randeep Surjewala said: “After all, BJP's lawyers came on the field. The Income Tax Department started raids in Jaipur. When will ED arrive?"

10:30 AM: “BJP will not be successful in its attempts to topple the Congress government in Rajasthan. All our Congress MLAs and our alliance MLAs are with Chief Minister Ashok Gehlot. All of them will be attending the meeting of Congress Legislative Party today,” Congress MLA Mahender Chaudhary.

10:23 AM: Ahead of the Congress legislature party meeting, party's Rajasthan In-charge Avinash Pande has said that Sachin Pilot is not responding to calls and has not been communicating. Pande said the party wants to hear him out but "indiscipline will not be tolerated".

10:20 AM: The Income Tax Department is conducting searches in four cities, including Delhi and Jaipur, in connection with a tax evasion case against a Rajasthan-based jewellery group, officials said on Monday.

10:15 AM: Congress leader Avinash Pande said a whip has been issued to all the party MLAs, asking them to attend the Congress Legislature Party meeting at 10.30 am.

'Is India At A Good Position In COVID-19 Battle?', Asks Rahul Gandhi