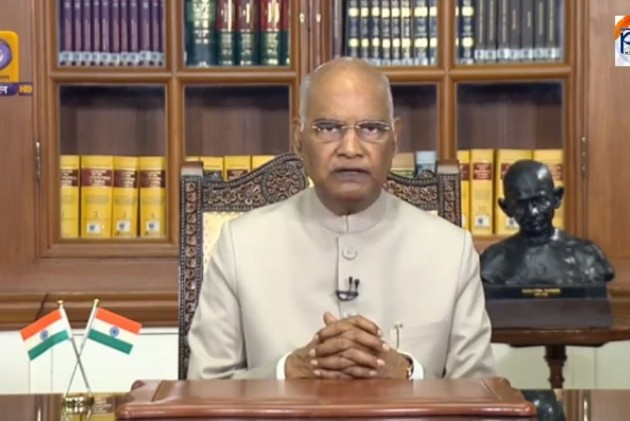 President Ram Nath Kovind is addressing the nation on the eve of 74th Independence Day.

This year’s Independence Day will take place amid the Covid-19 crisis. It also comes amid the border standoff between Indian and Chinese troops in the eastern Ladakh. India and China have been holding diplomatic and military talks on disengagement of troops from all the friction points in eastern Ladakh.

Special arrangements have been made at the iconic Red Fort in the national capital to mark the 74th Independence Day. Over 4,000 people including diplomats, officials and media personnel have been invited for the ceremony at the Red Fort and it is being organised maintaining a balance between dignity of the event and factoring in COVID-19 protocols, the defence ministry said.

7:22PM: Difficult times won't last, don't give up working for your dreams: Prez to students on closure of educational institutions due to COVID-19

7:20PM: Recently, govt implemented National Education Policy. I am confident that with the implementation of this policy, a new quality education system will be developed and this will transform the future challenges into opportunities, paving the way for a New India: President Kovind

7:18PM: We have learnt some tough lessons in the year 2020. The invisible virus has demolished the illusion that human being is the master of the nature: President Kovind

7:15PM: India's self-reliance means being self-sufficient without alienating or creating distance from the world. It implies that India will continue to engage with the world economy while maintaining its identity: President Kovind

7:14PM: Our brave soldiers laid down their lives defending our borders. The entire nation salutes the martyrs of Galwan Valley: President Kovind

7:12PM: Now, farmers can have barrier-free trade and get the best price for their produce anywhere in the country. The Essential Commodities Act has been amended to remove certain regulatory restrictions on farmers. This will help raise farmers’ income: President Kovind

7:09PM: More than 10 lakh stranded Indians have been brought back to India under the Vande Bharat mission during the pandemic. We have also helped other countries in need. India has proved to the world that it can stand beside other nations during calamities: President Kovind

7:08PM: This year's I-Day celebrations will be restrained as deadly virus has disrupted all activities: President Kovind

7:02PM: Nation is indebted to doctors, nurses and other health workers who have been continuously on the forefront of our COVID fight. Unfortunately, many of them have lost their lives battling the pandemic. They are our national heroes: President Ram Nath Kovind