A BJP sweep in Karnataka will, most observers anticipate, push the state's ruling Congress-JD(S) coalition to the brink. 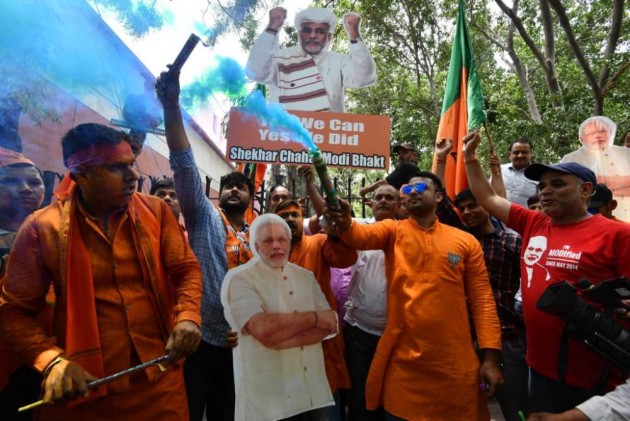 Improving on its tally of 17 seats, the Bharatiya Janata Party (BJP) is headed towards its best-ever performance in the state, leading in 23 of the 28 Lok Sabha constituencies. The Congress-Janata Dal (Secular) combine was leading in 4 constituencies.

A BJP sweep in Karnataka will, most observers anticipate, push the state's ruling Congress-JD(S) coalition to the brink. Incidentally, Chief Minister H D Kumaraswamy completes his first year in office on Thursday.

A year ago, Kumaraswamy's ascent to the CM's post had held out a picture of opposition unity with leaders from several regional parties attending his swearing-in ceremony. Since then, the Congress-JD(S) government had survived several bouts of instability as it struggled with bickering legislators and a belligerent BJP, led by B S Yeddyurappa, snapping at its heels.

The Lok Sabha leads largely live up to exit poll predictions. Current trends indicate the Congress-JD(S) gambit to fight the Lok Sabha elections together -- for the first time -- handed the BJP an advantage. The saffron party has performed consistently in Karnataka in Lok Sabha polls since 2004. It won 18 seats in 2004, 19 in 2009 and 17 in 2014.

The trends now indicate that the BJP is likely to make inroads into newer areas, especially the southern Karnataka where the Congress-JD(S) combine was seen to have a strong support base. Unlike previous elections, the Congress-JD(S) pact made it a straight fight in each of the state's 28 Lok Sabha constituencies.

"The BJP has benefitted from the JD(S)-Congress ghatbandhan in Karnataka," P Muralidhar Rao, BJP general secretary and Karnataka-in-charge told a Kannada news channel.