The BJP got an absolute majority getting 272 of the 458 seats, results of which were declared past midnight. 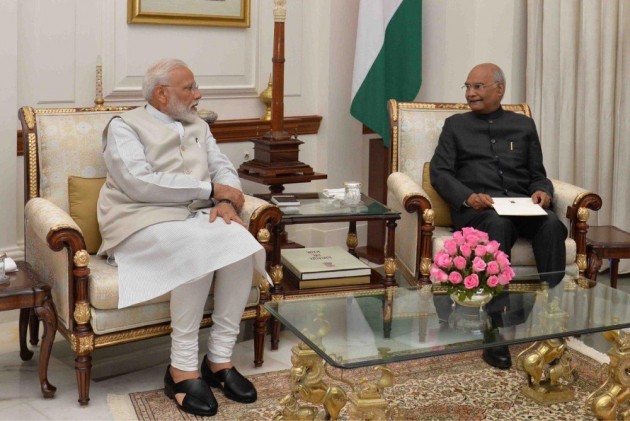 Prime Minister Narendra Modi on Thursday led his Bharatiya Janata Party to a massive victory for a second term in office.

The BJP got an absolute majority getting 272 of the 458 seats, results of which were declared past midnight and are on course to touch the 300-seat mark in the 543-member Lok Sabha.

After Jawaharlal Nehru and Indira Gandhi, Modi is the third prime minister of the country and the first non-Congress one -- who has been able to retain power for a second term with full majority in Lok Sabha.

In his victory speech, PM Modi said, "Its the victory of democracy and people," adding that the world will have to recognise the power of India's democracy.

This is the 21st century, this is a new India. "It's the victory of those who were once deprived of proper healthcare," he said.

Below are the LIVE updates:

7:25 pm: Prime Minister Narendra Modi on Friday met President Ramnath Kovind and submitted his resignation. Other cabinet ministers have also resigned. President Kovind has accepted their resignation and requested Modi and his cabinet to continue till a fresh oath is administered to them for the second term after the BJP-led National Democratic Alliance stormed won a comfortable majority of 352 seats.

12:35 pm:  According to sources, the party has convened a meeting of the Congress Working Committee, the highest decision making the body of the party at 11 AM tomorrow where party chief Rahul Gandhi is likely to offer his resignation.

12:00 pm: Senior bureaucrats of the state arrived at YSRCP Chief Jaganmohan Reddy's residence in Amaravati. Jaganmohan Reddy will take oath as the Chief Minister on 30th May.

11:15 am: Former Jammu and Kashmir CM and winning candidate from Srinagar Farooq Abdullah danced during celebrations at the party office in Jammu.

#WATCH Former J&K CM and winning candidate from Srinagar Farooq Abdullah dances during celebrations at party office in Jammu. National Conference has won 2 out of the 3 seats in the valley and is leading on 1. pic.twitter.com/NeGbhDxwJy

8:15 am:  In a first, Rashtriya Janata Dal (RJD) could not manage to win even a single seat in the 17th Lok Sabha elections.

7:35 am: US President Donald Trump congratulated Narendra Modi on his "big" election victory and said "great things" are in store for the bilateral strategic ties under the Indian Prime Minister's second innings.