As the results begin pouring in, the regional parties may be on top of the game. 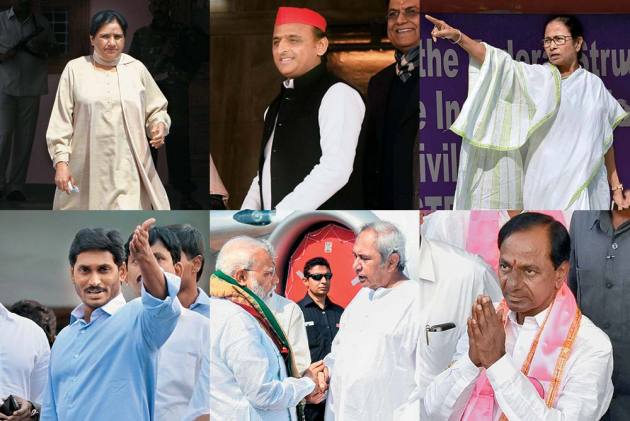 “... they say if you don’t vote, you get the government you deserve, and if you do, you never get the results you expected.”

E.A. Bucchianeri, Brushstrokes of a Gadfly

The exit polls of May 19 made an amusing TV reality show for many. Now comes the time for these channels to show reality. On the eve of counting votes, expectations and apprehensions are high as is anticipation riddled with anxiety amidst few certainties.

In A Hung Parliament, Who Can Be India's Next Prime Minister? Here Are Some Possibilities

Kaun Banaega Sarkar? In Absence Of Majority, How Regional Leaders Will Play Kingmaker

One certainty though appears to be that on May 23, as the results begin pouring in, the regional parties may be on top of the game. State leaders may hold more trumps than the BJP or the Congress that is, unless there is an unlikely saffron wave, as pre-result bluff and bluster has it. The southern states may once again be to the fore as in 1996 when a United Front government was formed. Like in 1996, Bengal would have a decisive say in the event of Mamata Banerjee’s Trinamool Congress putting up a good show. Unlike in 1996, this time Odisha under Biju Janata Dal’s four-time chief minister Naveen Patnaik bids fair to shine as one of the stars in the firmament of regional satraps.

The similarity to 1996, of a south-driven front, ends with the states involved. Although the parties as players may be the same, the personalities, except for the Telugu Desam Party’s Chandrababu Naidu, are different. These elections are DMK chief M.K. Stalin’s first critical test at the state and national level after the demise of his father, the Tamil titan Muthuvel Karunanidhi. With AIADMK’s Jayalalithaa also gone, Dravida politics is bereft of proven leadership. Stalin has to rise to fill the leadership vacuum. Bengal chief minister Mamata Banerjee is in a somewhat similar spot, much like her Karnataka counterpart H.D. Kumaraswamy, whose Janata Dal is in a coalition government with the Congress. Others facing a similar, though far less challenging, trial are chief minister K. Chandrasekhar Rao (KCR) of the Telangana Rashtra Samiti and Y.S. Jaganmohan Reddy of the YSR Congress in Andhra Pradesh.

Impressive as this line-up of non-Congress, non-BJP leaders which includes five chief ministers without counting Kerala’s Pinarayi Vijayan who would support a third front might appear, four of the chief ministers are on tenterhooks. KCR in Telangana and the CPM’s Vijayan in Kerala are on strong ground. Their pole position in their respective states would be unaffected by the Lok Sabha election results. Recently re-elected as chief minister with a thumping majority, KCR is on a strong ground for bargaining, be it with the BJP, the Congress or regional parties. Like Jaganmohan Reddy, KCR’s pet aversion is to Naidu and the Congress, and in that order. That makes him BJP’s natural ally if it falls short of the required numbers. Should BJP not need him, he may still keep away from the Opposition with an eye on making the most of a cosy relationship with the Centre. Patnaik in Odisha would adopt a similar strategy in case he wins the Assembly election for a fifth term.

The future of Naidu, who has taken a leading role in bringing together the Opposition parties and mediating their tie-up with the Congress, depends on the TDP's performance in the Assembly and Lok Sabha elections. Even if Naidu fails to win another term in Andhra Pradesh, where the TDP is locked in a close race with Jagan Reddy’s YSR Congress, his party needs to score a decent number of MLAs and MPs. Otherwise, Naidu will no longer be a force to reckon with despite his resources, resourcefulness and excellent cross-party relations. Should Naidu fail expectations, he can count on KCR and Jagan Reddy gleefully aiding and abetting a BJP government at the Centre to pillory and persecute him at every step. And, if his party’s poor fortunes are matched by the BJP’s own failure to form a government, then, too, Naidu will be the loser: he will no longer be kingmaker.

Regardless of how many seats the Congress wins out of the 20 in Kerala, chief minister Pinarayi Vijayan may survive unshaken. He would remain a strong source of support to non-BJP and non-Congress chief ministers elsewhere.

Chief minister Kumaraswamy could be the first casualty of a BJP victory. The JD(S)-Congress coalition, which is seething with discontent, may fall unless the two parties win at least 10-12 of the 28 Lok Sabha seats in Karnataka; and, the Congress improves its all-India showing. The BJP’s destabilisation of the coalition in Karnataka may be followed by games to topple the Congress governments in Madhya Pradesh and Rajasthan, and Banerjee’s TMC government in Bengal.

In fact, Bengal might be on the boil on the very day of counting. There is widespread fear of violence vitiating the counting on May 23. The BJP would, doubtless, step up the offensive and provocations, including by way of polarising the people, to bait Banerjee. She herself would give her detractors no quarter. In the ensuing confrontation, kuch bhi ho sakta hai (Anything can happen). It is speculated that conditions might be created for dismissal of the TMC ministry and imposition of President’s rule in the state. The BJP will keep up its aggressive pressure to expand itself in Bengal by every possible means, whatever the outcome on May 23.

The one bright spot in all this is that the DMK appears poised for a spectacular sweep in Tamil Nadu. Its victory in alliance with the Congress would spell the end of the AIADMK regime, propped up by the BJP. There could be rich pickings for the DMK as the AIADMK falls apart. Stalin would have finally come into his own with a chance to prove his mettle as a state leader with a national profile. He would be unfazed by the BJP returning to office at the Centre as the DMK has, in the past, enjoyed excellent relations with the party and been part of its government. Stalin can be expected to lead the party and the state without letting down the Congress or being confrontational with the BJP, but raising the all-round acceptability and value of the DMK as Karunanidhi had done.

Modi’s radar should not miss this silver lining in the cloud.

(The writer is a political and foreign affairs commentator. Views are personal.)