LIVE | We Are Moving Forward With Mantra 'One Mission, One Direction': Modi At BJP Manifesto Launch 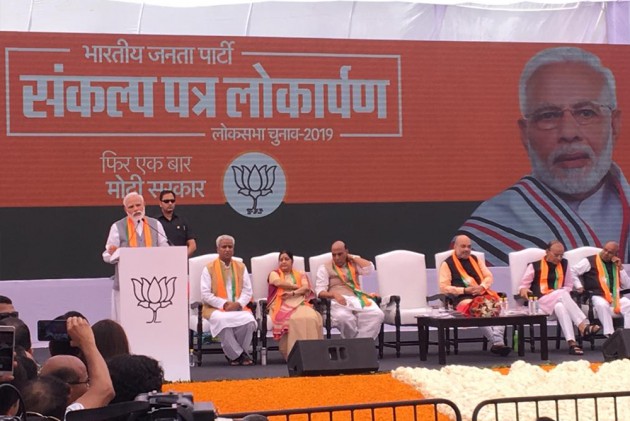 The mention of the Ram Mandir in the BJP manifesto is no surprise, CPI(M) General Secretary Sitaram Yechury said Monday, alleging that the saffron party has been using it for the last 30 years in a bid to "sharpen communal polarisation."

"Is this a surprise? For the last 30 years, every single 'jumla ghoshna' of theirs has included construction of the Ram Mandir... This point was continuously being repeated. Every election they did it. Their whole agenda is that of sharpening communal polarisation and hoping that it would garner them some votes. But they are sorely mistaken," Yechury reacted on the BJP manifesto.

The Congress on Monday slammed BJP for its manifesto and said that the ruling party has "simply copy-pasted" its 2014 poll document and changed all previous deadlines.

Senior Congress leader Ahmed Patel said the BJP should have come out with a 'maafinama' (letter of apology) instead of a manifesto.

At BJP Manifesto launch, Narendra Modi said his govt will set up Jal Shakti Mantralaya which will look into maximum optimization of water resources.

I have had to do in five years the work that should have been done in the last 50-60 years, he said.

We have set 75 well-defined resolutions in our manifesto that we can fulfill in a time bound manner. We are moving forward with 'one mission, one direction', said PM Modi said.

Prime Minister Narendra Modi at BJP manifesto release: We have set 75 well-defined resolutions in our manifesto that we can fulfill in a time bound manner. We are moving forward with 'one mission, one direction'. pic.twitter.com/8JrBnPqocj

Modi understands the pulse of the country, Rahul Gandhi or other parties do not, said Sushma Swaraj at BJP Manifesto launch.

EAM Sushma Swaraj at BJP manifesto release: This is an indication of Modi ji's diplomatic success that when Pakistan threatened to boycott Organisation of Islamic Cooperation(OIC) meeting if India was invited then 56 out of 57 countries said let Pakistan not come. pic.twitter.com/Zp7s1G8VZ4

This manifesto is not prepared with a ‘tukde tukde’ mindset. This has been prepared with a strong nationalist vision, said Finanace Minister Arun Jaitley
Those who failed in the past for decades can't manufacture fresh ideas for the future but those who have delivered in the past have a credibility to offer a roadmap for the future, said Arun Jaitley.
The essence of the manifesto is to deplete poverty over the next 5 yrs to single digit and then eventually eliminate it, he said.
Will pass Citizenship Amendment Bill, said Rajnath Singh during launch of BJP Manifesto
Sankalp Patra is a visionary document capturing the aspirations of Indian citizens, said Union Home Minister Rajnath Singh.
BJP will double farmers’ income by 2022, he said.
We reiterate our position since the time of the Jan Sangh to the abrogation of Article 370.We are committed to annulling Article 35A of the Constitution of India as the provision is discriminatory against non-permanent residents and women of Jammu and Kashmir, Rajnath Singh said.
We will also provide short-term new agriculture loans up to Rs. 1 lakh at a 0% interest rate for 1-5 years on the condition of prompt repayment of the principal amount he said.
We reiterate our stand on Ram Mandir. We will explore all possibilities within the framework of the Constitution to facilitate expeditious construction of Ram Mandir, said Rajnath Singh during BJP manifesto launch.

Union Home Minister Rajnath Singh at BJP's election manifesto release: As far as Ram Mandir is concerned, we reiterate the promise made in the last elections. We will weigh all our option & we will try that the Ram Mandir be built as soon as possible in a harmonious environment. pic.twitter.com/xofbN7500K

He says, "With all our promises, made in this manifesto, we are taking a step towards building a 'New India."

Union Home Minister Rajnath Singh at party's election manifesto release: With all our promises, made in this manifesto, we are taking a step towards building a 'New India.' #LokSabhaElections2019 pic.twitter.com/Yp4mnIXrvd

Last 5 years will be remembered for the development that has taken place under BJP govt’s rule, Says Amit Shah
In 2014, the people of this great country had blessed us with a historic mandate. Despite majority, the BJP formed a government of the NDA under PM Narendra Modi , says Amit Shah during launch of party manifesto.
India has emerged as a superpower under Modi govt’s regime, he said.

BJP President Amit Shah at party's election manifesto release: In these 5 years, the BJP has worked towards providing a decisive govt, under the leadership of Narendra Modi. #LokSabhaElections2019 pic.twitter.com/6QFcIabYY5

Urmila Matondkar to file nomination today
"I am going to file my nomination today. I am feeling excited; The complaint filed against me is baseless and bogus. I believe in and respect Hinduism," says Urmila Matondkar.
Ahead of BJP's manifesto release, Congress reminds PM Modi of vikas
Ahead of Bharatiya Janata Party's manifesto release, Congress took to Twitter to remind Prime Minister Narendra Modi of 'Vikas' (development).

-- All schools in Hapur district to remain closed from 9 April to 11 April in the light of the first phase of Lok Sabha Elections 2019 on 11 April.

PM gets 'hysterical' when elections are approaching, claims Sharad Pawar

Bharatiya Janata Party chief Amit Shah will meet veteran leaders of the party ahead of manifesto release. The BJP will release its manifesto, described by the BJP as its "sankalp patra", on Monday (April 8) for the 2019 General elections.  Top party leaders, including Prime Minister Narendra Modi and its chief Amit Shah, will be present at the launch.

The BJP will release its manifesto for the Lok Sabha polls scheduled to start from April 11 on Monday, with issues of development and national security set to be its key highlights.

RJD, in its manifesto, promised vacant posts in government jobs to be filled.

Congress on Sunday unveiled its campaign slogan Ab hoga nyay (now, there will be justice) that seeks to play on the Hindi acronym for the party’s minimum income guarantee scheme or Nyuntam Aay Yojana.