Congress sources say the campaign in Wayanad will largely be managed by party’s Kerala unit leaders though Priyanka Gandhi Vadra will canvas for 2-3 days; BJP likely to get Smriti Irani to campaign against Rahul. 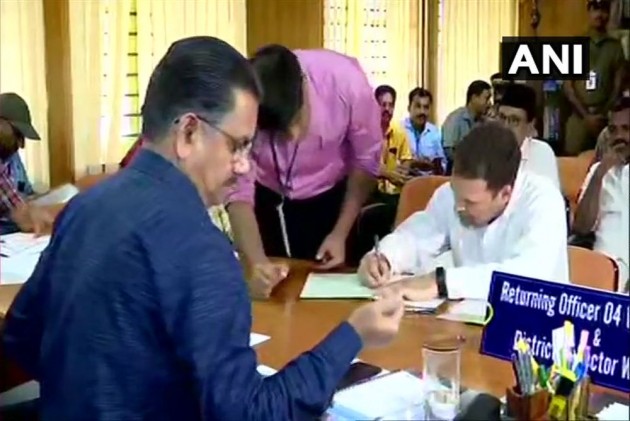 Congress president Rahul Gandhi on Thursday filed his nomination for the upcoming Lok Sabha polls from Kerala’s Wayanad constituency. Wayanad, situated in the Western Ghats in north Kerala, is the second constituency that Rahul will be contesting the polls from, aside from his traditional stronghold of Amethi in Uttar Pradesh.

The Congress president, accompanied by his sister and party general secretary Priyanka Gandhi Vadra had reached Calicut on Wednesday night. Priyanka, along with a host of senior party leaders including AK Antony, Oommen Chandy, KC Venugopal, Mullapally Ramachandran, Ramesh Chennithala and Mukul Wasnik will be accompanying Rahul on a two-hour long road show that will precede the filing of nomination papers.

The Congress had, last week, announced that Rahul had agreed to demands of his party colleagues from Kerala, Karnataka and Tamil Nadu to contest the upcoming polls from a second seat in southern India. Antony had announced that the decision to choose Wayanad, considered a safe seat for the Congress party, was taken as the district is a “trijunction of three states” with Tamil Nadu’s Theni and Niligiri districts on one side and Karnataka’s Chamarajnagar and Mysore districts on the other.

BJP Attacks Rahul Gandhi For His Decision To Contest From Wayanad, Says He Senses Loss In Amethi

Rahul’s decision to contest from Wayanad has, however, riled the Left Front with which the Congress party was, till last month, trying to stitch a pre-poll alliance for West Bengal. Kerala chief minister Pinarayi Vijayan has declared that Rahul’s decision to contest from Wayanad, where the BJP is only a fringe player, has indicated that the Congress wants to fight the Left parties-led ruling LDF alliance in the state. Vijayan and CPM veteran Prakash Karat have both declared that the Left parties will put in all their might behind CPI candidate PP Suneer in Wayanad to ensure Rahul’s defeat.

The NDA candidate from Wayanad is Thushar Vellapally, who leads the Bharat Dharma Jana Sena (BDJS) with which the BJP had stitched an alliance back in 2016 in the hope that the fledgeling party will be able to rally the numerically and politically significant Ezhava community of the state behind the saffron front. The BDJS is the political arm of the Sree Narayana Dharma Paripalana, a prominent cultural organisation representing interests of the Ezhava community.

While Rahul’s victory from Wayanad is largely touted as a foregone conclusion, his decision to contest from the seat in itself has made the political slugfest for the southern seat, known otherwise across the country for its scenic beauty, extremely heated. Prime Minister Narendra Modi had recently claimed that Rahul had decided to contest from Wayanad because the seat is dominated by the minority community and that the Congress president feared being defeated in Amethi because Hindus in the Nehru-Gandhi pocket borough had resolved to vote him out of the seat that he has represented from the time he made his electoral debut in 2004.

Rahul’s rival in Amethi, BJP candidate Smriti Irani too has been claiming that the Congress president had fled to a safe seat because he knew that his defeat in the central UP constituency was imminent. Sources say the BJP is likely to get Irani to campaign against Rahul for a few days. Thushar Vellapally has also slammed Rahul’s decision to contest from Wayanad, claiming that the fight was now an “outsider vs. native” contest.

Congress sources say Rahul will not devote a lot of time campaigning in Wayanad. While Priyanka Gandhi, who has the uphill task of reviving the party’s poll prospects in eastern Uttar Pradesh, is expected to campaign for Rahul in Wayanad for 2-3 days, it would largely to be left to the party’s Kerala unit leaders to ensure that the Congress president wins from the constituency by a record margin, a senior party leader told Outlook.