The daughter of JD(U) leader said she wished to return to Bihar after her studies abroad and change it into "most developed Indian state within five years". 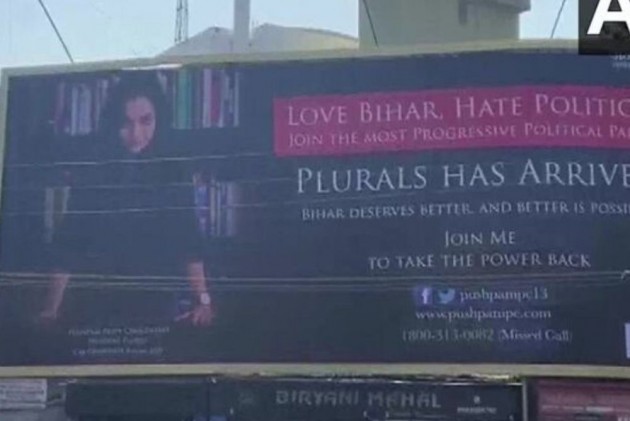 Full-page advertisements in different newspapers in Bihar on Monday caught the attention of many, with a young woman staring at readers in one of the ads along with caption -- CM Candidate Bihar  2020.

Another full page was devoted to an open letter from the latest contender for the CM post -- along with the history of Bihar, she promised to turn the state into Europe by 2030. The young woman exhorted voters to ensure that her 'shapath patra' or an oath of commitment was kept safe for future reference.

For good measure, she said she wished to return to Bihar after her studies abroad and change it into "most developed Indian state within five years".

The woman in question who has paid for the newspaper advertisements has been identified as Pushpam Priya Chaudhary, a UK-educate daughter of former JD(U) Legislative Council member Vinod Chaudhary who is a native of Darbhanga. She has named her party 'Plural'.

Pushpam, who is quite active on social media, made announcements on her party and its plans on her Twitter handle also. Tweeting that Bihar needs change and that her party has a roadmap for 2025 and 2030, she talks of the development of Bihar and appeals to the people to associate with her fledgling party.

Sources said that she comes from a politically influential Brahmin family of Darbhanga and the announcement of her candidature when Assembly elections are slated by the year-end could be an attempt by a political strategist of Bihar to intrude into the politics in Darbangha and Koshi areas.

While the BJP-Janata Dal-United alliance would project incumbent Nitish Kumar as the chief ministerial candidate, the opposition Rashtriya Janata Dal and its allies will field Tejashwi Yadav, the son of jailed party chief Lalu Prasad. The entry of Pushpam has added a new dimension to the state politics.

However, not all are impressed. Senior JD-U leader Afzal Abbas scoffed at the development, saying no one becomes a leader by issuing newspaper advertisements. To become a leader, he pointed out, one has to go and work among the masses.

"However, we have democracy in the country. Anyone can declare himself or herself as the chief ministerial candidate. Ultimately, it is the people who decide who is their leader. It is just an attempt at getting one's name in print in newspapers," he remarked.

He said that the development need not be taken seriously and there would be no effect on Bihar politics as such.

As per Pushpam's Twitter handle, she is a postgraduate in public administration from the London School of Economics and Political Science as well in developmental studies from the University of Sussex.