In view of the latest guidelines issued by the city government for the containment of coronavirus in Delhi, travel inside the metro will be allowed, with certain restrictions, DMRC officials said on Tuesday. 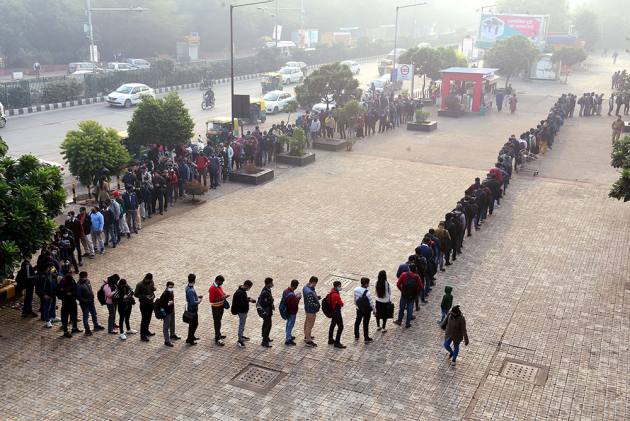 Long queues of people were seen outside various Delhi Metro stations on Wednesday morning, a day after new restrictions were put in place by authorities, including running of its trains with only 50 per cent seating capacity and no provision for standing for commuters, in view of rising cases of COVID-19 in Delhi.

In view of the latest guidelines issued by the city government for the containment of coronavirus in Delhi, travel inside the metro will be allowed, with certain restrictions, DMRC officials said on Tuesday. While the new restrictions came into force with immediate effect, soon after the DDMA announced the new norms, the queues in the morning time, when metro services are used by a large number of office-goers, were seen getting longer at some of the stations, like Laxmi Nagar, Akshardham, among others.

Many also took to Facebook and Twitter to share pictures of such queues outside stations. Amid a spike in COVID-19 cases following the emergence of Omicron variant, Delhi Chief Minister Arvind Kejriwal on Tuesday had declared a 'yellow alert' under which schools, colleges, cinemas and gyms shall be closed, shops dealing in non-essential items will open on odd-even basis, and metro trains and buses will run with 50 percent of seating capacity in the city.

The DMRC network's current span is nearly 392 km with 286 stations (including the Noida–Greater Noida Metro Corridor and Rapid Metro, Gurgaon). Travel will be allowed, only up to 50 per cent of the seating capacity inside the metro trains. In addition, no passenger shall be allowed to stand during the travel, they said. "In view of the same, entry into metro stations will be regulated by restricting the number of gates open for entry into stations to ensure compliance with the guidelines. Out of 712 gates, 444 will be kept open as of now," the official said on Tuesday.

India has recorded 781 cases of the Omicron variant of coronavirus across 21 states and UTs so far out of which 241 people have recovered or migrated, according to the Union Health Ministry data updated on Wednesday. Delhi recorded the maximum number of 238 cases followed by Maharashtra at 167, Gujarat 73, Kerala  65 and Telangana 62. The national capital on Tuesday registered a massive spike in daily COVID-19 with 496 fresh cases, the highest since June 4, while the positivity rate also rose to 0.89 percent along with one fatality due to coronavirus in the city.