Lt.Gov Sinha's engagements at the Dubai Expo 2020 were part of the Jammu and Kashmir Week, which began from January 3, at the India Pavilion at the Expo. 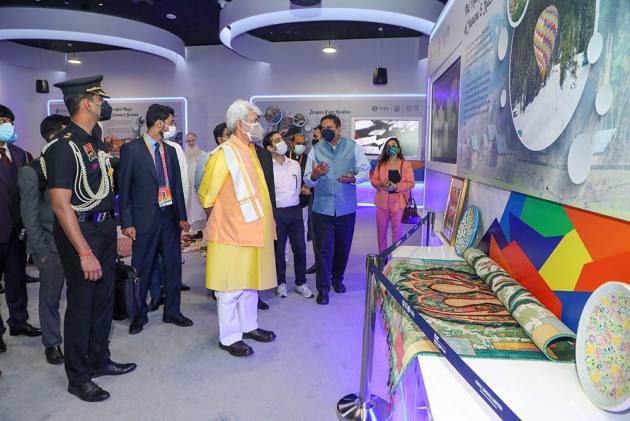 Lieutenant Governor of Jammu and Kashmir Manoj Sinha welcomed global businesses to invest in key sectors of the Union Territory  including tourism, handloom and handicraft, to boost the growth of industrial enterprises, cottage and village industries.

As part of the Jammu and Kashmir Week, Sinha, along with other government officials from the Union Territory (UT), held various meetings and invited global investors to invest across key sectors like tourism, handloom & handicraft, food processing among others, according to a press statement.

Sinha, who is on a three-day official visit to the UAE, also met the Chairman of Dubai ports giant DP World Sultan Ahmed bin Sulayem  to discuss the opportunities and potential areas of collaboration between the Jammu and Kashmir government and the company.

Sinha also inaugurated Jammu and Kashmir promotion week at the local Lulu Hypermarket, where the world-famous GI-tagged saffron has been launched in a major step towards boosting trade ties between Jammu and Kashmir and Dubai.

Sinha termed it as a "historic agreement" and said the trade between Jammu & Kashmir and Dubai has remained steady and it reflects the resilience of the deep economic linkages.

"Relations between India and the UAE are long-standing and deep-rooted. People-to-people contact and trade have seen momentum in the recent years under the leadership of Prime Minister Narendra Modi," he said.

The government also signed an MoU with the UAE-based retail major Lulu Group that will invest Rs 200 crore in Jammu and Kashmir to set up a food processing and logistic hub in Srinagar.

The agreement is aimed at further expanding Jammu-Kashmir-Dubai collaboration and Jammu and Kashmir-Lulu Group partnership.

Delivering a special speech on the ‘Development after the Union Territory’, Sinha also spoke about the initiatives taken by the Jammu and Kashmir government in ensuring growth across different sectors.

Given the prominence of Jammu and Kashmir as a tourist destination, it will also participate in a joint session with the tourism ministry on January 12.

The vision of the UT of Jammu and Kashmir is to promote balanced growth of industry and commerce through sustainable utilisation of natural resources and development of human skills, the statement said.

With this vision, the Jammu and Kashmir government is working towards creating an enabling and entrepreneurial-friendly environment which will facilitate the sustainable growth and development of industrial enterprises, including cottage and village industries.

The UT aims to encourage new investment in industries and facilitate new entrepreneurs. With the focus on growth in these areas, the UT is also working towards encouraging and creating conditions that will enable the promotion of human resource skills, creation of new employment opportunities and development of new designs in the handloom and handicrafts sector, it said.