Saifi, who has been sitting in protest in Lucknow to get a drain cleaned and covered, speaks to Outlook Magazine about city politics and joining Nagrik Ekta Party. 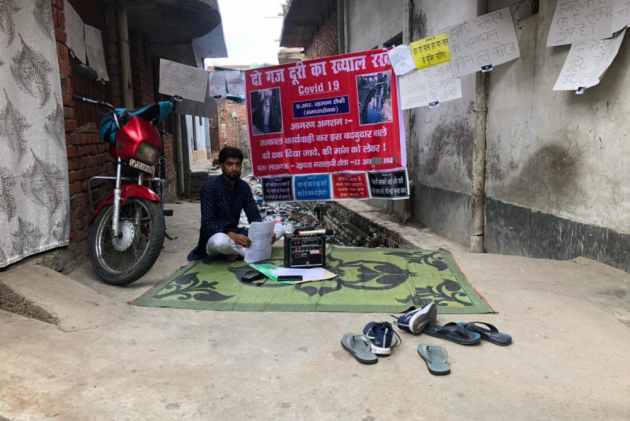 AR Rahman Saifi, a resident of Lucknow’s Masalchi Tola in the Khadra area, is protesting for a drain to be cleaned and covered.  The activist started the protest after two people allegedly lost their lives after falling into the 7ft deep drain. An adamant Saifi says that if his demands are not met, he’ll jump into the drain himself and end his life.  The activist speaks to Outlook Magazine's Mohd. Urooj Siddique on why he is protesting and how Lucknow is no more the 'City of Nawabs'.

You’ve been sitting in protest for the past four days, have you got any response from the concerned authorities yet?

On the 7th of July, concerned officials visited for an inspection. They cross-questioned me about the approval drawings of the houses in the locality. I had handed over the issues in writing to them. They had assured of sending an engineer and cleaners the next day but since then no one has yet arrived, All I want is to get the drain cleaned and covered as two people have already lost their lives by falling in there.

What made you sit here and what are your upcoming plans for this protest?

It's already been around 18 months of running from one place to another and doing paperwork but nothing has changed yet. From writing to the Municipal Corporation to the Chief Minister Yogi Adityanath, I have done it all and now I am protesting by sitting on this drain because I have no more options left.

What are the challenges you think one faces when raising a voice for basic necessities on such a ground level?

Obviously, it is not easy to raise one's voice as one has to face a lot of consequences, whether from the government or from the administration. I've been fighting for poor and weaker sections of society for the past few years. Police visits have become a regular business and working for society or as a social worker often makes you a subject of others’ jokes and get called names like 'psycho' or 'maniac'. Yesterday, at around 12:30 am, my brother and friends had to rush me to the Hazratganj Civil Hospital. I was hospitalized for 3 hours. Doctors told me the reason for such a sudden health issue was the poisonous gas in the drain. But I am sitting here again. Either the work will get completed or I will jump in myself.

You have protested for such causes in the past as well; you also climbed inside a water tank once. What makes you challenge the authorities with your own life?

There's a story to it...I was passing the Khadra Bridge with my elder sister, where we saw a 24-year-old boy jumping in the Gomti river. He was a labourer and amid nationwide lockdown, he had nothing left for survival. The incident knocked me inside out. Hence, in order to bring it to Chief Minister Yogi Adityanath's attention, I climbed up the water tank, though the police managed to pull me back. What meaning can be of life if one's deprived of their rights? I have nothing else to offer so I offer them the only thing I have, my own life.

Lucknow has already started dancing to the tune of upcoming assembly elections; you too have joined Nagrik Ekta Party recently. Do you see the current situation as an opportunity to bring local but important issues to light?

There's no mystery to it that every political party starts promoting their promises and hollow claims ahead of elections. To be honest, everyone knows the reality of such claims, or now people have adapted to the belief that being a politician directly or indirectly means being a custodian of one's own lucrative but fake promises. When it comes to Uttar Pradesh, politics has an entirely different recipe. The literacy rate is low, and unemployment is at its peak. To gain votes during election season becomes a game, and not actually contesting the elections. I have joined NEP (Nagrik Ekta Party) because the party has educated and understanding members. When there was no one to support me, the party workers always helped me in my difficult times. I could have joined any major party if gaining political favours was my priority but I joined NEP because I have no one to back me up.

Lucknow is one of the most influential cities in Uttar Pradesh, what are your views on the development of the city during the last few years?

First and foremost, no project gets completed on time. They claim to turn Lucknow into a smart city but the potholes alone on the roads hold a mirror to such claims. The colonies of the poor and weaker sections are left unseen, the only purpose of such colonies is vote churning, nothing else. The budget of the Municipal Corporation is less than what is actually needed. To work for society, people like me have to face the administration every time as if we demand something that we aren't worthy of. Lucknow has many localities where basic amenities like electricity and roads are yet to be addressed but no one really cares. Lucknow is no more the city of Nawabs but politics, and the price of it is being paid by the common man, like the one who jumped from the bridge and put his life to an end.