Madhya Pradesh: Bus With 50 People Onboard Skids Off Bridge Amid Heavy Rains

The incident occurred on Saturday evening in Madhya Pradesh’s Sheopur district, officials said adding that all passengers were rescued following the accident. 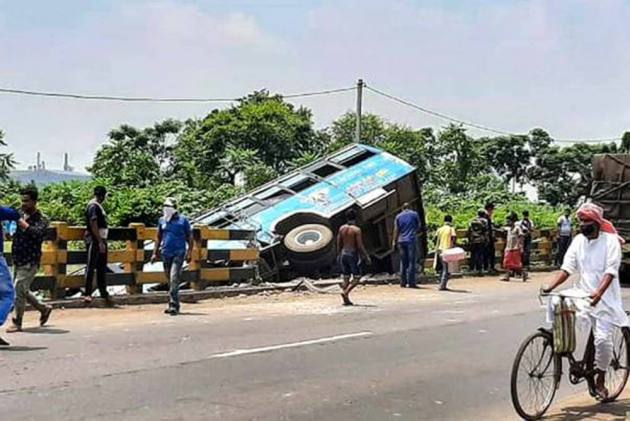 A bus, which was crossing a newly constructed over the Mithi river in Madhya Pradesh’s Sheopur district, skidded off the overflowing bridge amid heavy rains wreaking havoc in the region, officials said on Sunday.

The incident occurred on Saturday evening and about 50 people were onboard the bus, officials said adding that all passengers were rescued following the accident.

While passing through the inundated bridge in Bargavan village, located about 70 km from the district headquarters, the bus landed into a pothole and came to a halt, local police station's inspector Mamta Gujar told PTI.

According to Gujar, the accident was caused due to the rear wheels of the bus skidding off the bridge. Due to the heavy flow of water, its rear wheels skidded off the bridge, she said. "All the passengers are safe. No one has lodged any complaint with police,” the official said.

Rainfall activity subsided in Sheopur in the last 24 hours, according to the India Meteorological Department's (IMD) Bhopal office. The district received 10 mm downpour in the 24-hour period ending at 8.30 am Sunday, the IMD said.