The Met department has sounded a red alert for Shivpuri, Sheopur, Guna and two other districts, besides orange alert for nine and yellow alert for other eight districts. 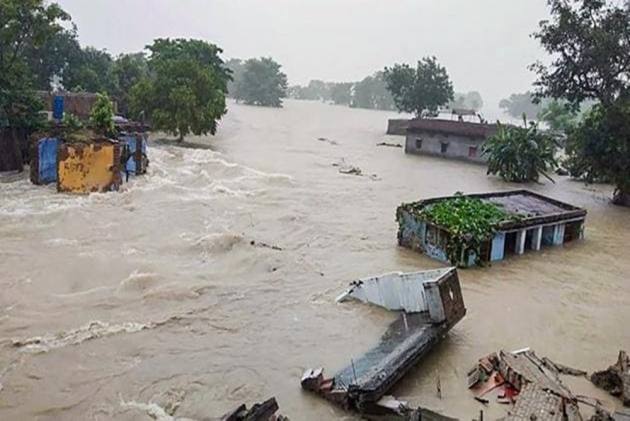 No respite from torrential rain seems likely in Madhya Pradesh's worst-hit Gwalior-Chambal region in the next 24 hours. It has affected 1,171 villages, especially Sheopur and Shivpuri districts, officials said, adding NDRF and SDRF teams have rescued 1,600 people from flooded areas so far but at least 200 villages are still marooned.

The Met department has sounded a red alert for Shivpuri, Sheopur, Guna and two other districts, besides orange alert for nine and yellow alert for other eight districts.

Earlier in the day, three people stranded atop a tree for about 24 hours in Beechi village and five others in Piproudha in flood-hit Shivpuri district, which witnessed "unprecedented heavy rains", were rescued, officials said.

"A total of 1,171 villages were affected in the Gwalior-Chambal region due to excessive rainfall, especially Shivpuri and Sheopur, where an unprecedented 800 mm rainfall (in the last 24 hours ending 8 AM on Tuesday) resulted in flooding," the CM said.

A railway official said on Tuesday that repair work is going on between Padarkhed and Mohana because of which several trains passing through the Shivpuri-Gwalior section are either diverted or terminated at the originating stations. A major portion of a bridge over the Sindh river near Ratangarh temple close to Datia town washed away due to heavy rains, a police official said.

Meanwhile, CM Chouhan apprised Prime Minister Narendra Modi about the rain situation, who assured of all help to the state, sources said.

The CM said he will soon conduct an aerial survey of the flood-affected areas of the state.

"I am in touch with collectors and other officials of the flood-affected districts and people were sent on a high-places for safety where relief camps too were started," he said, adding the situation in rain-hit Shivpuri, Sheopur, Bhind and Datia districts is monitored continuously.

The chief minister chaired an emergency meeting at the secretariat in the state capital to monitor the rescue operations and reviewed the flood situation in Gwalior and Chambal divisions, an official said.

As the flood situation in the Gwalior-Chambal region worsened, Chouhan informed Prime Minister Narendra Modi over the phone, sources said.

"The prime minister has assured Chouhan of all necessary help to the state in dealing with the flood situation," a source said.

Chouhan also informed Modi about the ongoing rescue operations and discussed seeking help from the Army to deal with the situation, the sources said.

However, because of the heavy rains and bad weather in the district on Tuesday, the aircraft are unable to fly for the rescue operations, officials said.