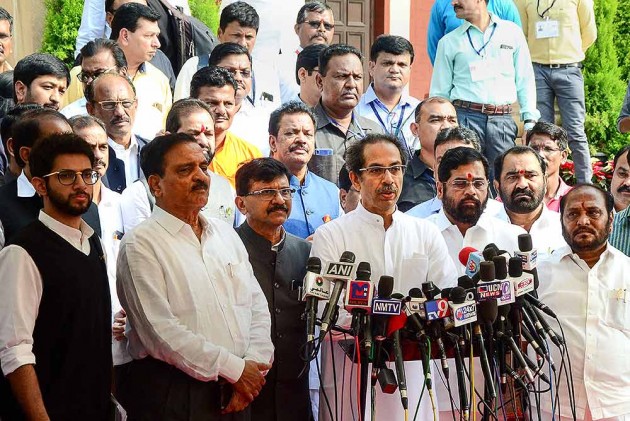 NCP's Ajit Pawar was sworn in as Thackeray's Deputy while ex-chief minister and Congress leader Ashok Chavan as a Cabinet minister.

Besides Pawar and Chavan, Uddhav's son Aditya Thackeray took oath as a minister in the state cabinet and became the youngest person in the council.

Aditya Thackeray, MLA from Worli, is the first member of the Thackeray family to contest elections.

The swearing-in took place in Mumbai's Vidhan Bhavan (state legislature) premises where a total of 36 ministers will take oath, they said.

Earlier, state Cabinet had six ministers, besides the chief minister.

Balasaheb Thorat and Nitin Raut of the Congress, Eknath Shinde and Subhash Desai of the Shiv Sena and Jayant Patil and Chhagan Bhujbal of the NCP took oath along with Thackeray on November 28.

Maharashtra can have a maximum of 43 ministers. The size of the council of ministers cannot exceed 15 per cent of the total number of MLAs, which is 288 in the state.

The Shiv Sena last month joined hands with the Congress and NCP, its traditional adversaries, after its alliance with the BJP collapsed over the issue of sharing the
chief ministerial post.

As per the power-sharing formula decided by the three MVA allies, the Sena was allotted 15 ministerial berths, excluding the CM's post, the NCP 15 and the Congress 12 berths.