NCP chief Sharad Pawar is expected to meet Congress president Sonia Gandhi on November 17 in New Delhi where a final decision on government formation is likely to be taken. 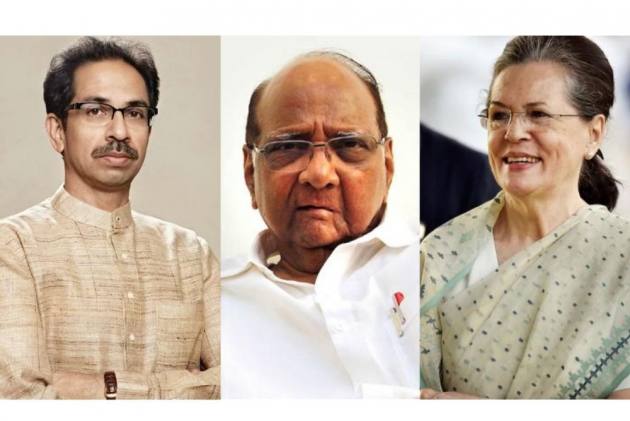 The draft common minimum programme (CMP) prepared ahead of government formation in Maharashtra focuses on farmers and measures to tackle unemployment, a senior Congress leader said on Friday.

Leaders of the Congress, the NCP and the Shiv Sena met in Mumbai on Thursday to work out a common minimum programme (CMP) before finalising a possible alliance for government formation in Maharashtra involving the three parties.

Talking to PTI, the Congress leader, who did not wish to be named, said representatives of the Congress, the NCP and the Sena have prepared a draft CMP which will now be approved and finalised by top leaders of the three parties.

"All-inclusive development and justice to all sections of the society is the criteria on what we will work if the CMP is approved by the leadership of all three parties," he said.

Among other issues, the draft CMP focuses on solving the problems being faced by farmers and tackling unemployment, the Congress leader said.

The Congress leader said another meeting will be held among the three parties if any suggestion for inclusion or deletion of any issue is made.

NCP chief Sharad Pawar is expected to meet Congress president Sonia Gandhi on November 17 in New Delhi where a final decision on government formation is likely to be taken.

Meanwhile, when contacted, senior Congress leader Manikrao Thakare said Gandhi will take the final call on the draft CMP and then a decision will be taken on how to move forward.

The Sena reached out to the Congress-NCP combine for government formation after its demand for sharing the chief minister's post and equal distribution of portfolios was rejected by the BJP, its pre-poll ally.

The BJP and the Sena, which fought the October 21 polls in an alliance, secured a comfortable majority by winning 105 and 56 seats, respectively, in the 288-member assembly, where the majority mark is 145.

The Congress and the NCP, pre-poll allies, won 44 and 54 seats, respectively.

President's rule was imposed in the state on Tuesday after Governor Bhagat Singh Koshyari sent a report to the Centre, stating that the formation of a stable government was impossible in the current political situation.