In Maharashtra, the voter turnout almost matched the 63.38 per cent polling recorded in the last state elections in 2014. 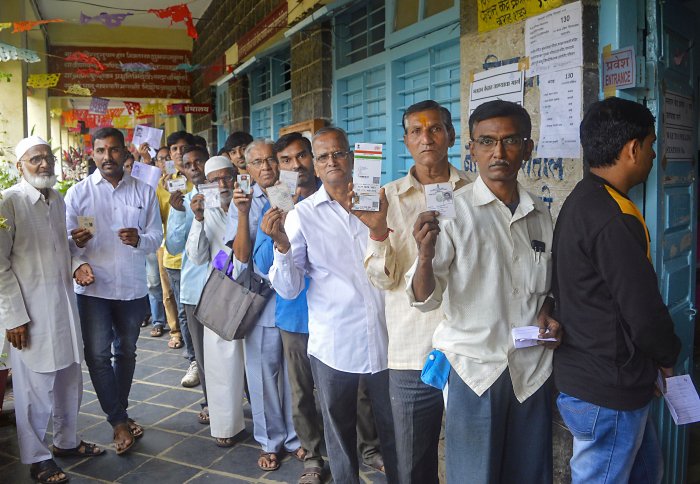 Maharashtra and Haryana assembly elections held on Monday saw a voter turnout of 63 per cent and 62 per cent, respectively. The polls in both the states were held smoothly, except a minor clash in Nuh district of Haryana in which a woman was injured; and the glitches in EVMs at some polling booths in Maharashtra.

In Maharashtra, the voter turnout almost matched the 63.38 per cent polling recorded in the last state elections in 2014.

Rural areas of the state fared better, with voters there showing more enthusiasm than their urban counterparts.

Polling began at 7 am and ended at 6 pm. A galaxy of bigwigs from politics, Bollywood and India Inc joined the young and the old in exercising their franchise in this festival of democracy.

A nonagenarian was the cynosure of all eyes as he accompanied Union minister Smriti Irani outside a polling booth in Mumbai. "Today's hero is Khanna sahab, who served in
the Army. At 93, he came out to vote. It is an inspiration," Irani said.

The opposition Congress said it filed over 250 complaints of poll procedure violations with the Election Commission, including one for Ramtek segment where it said if the EVM button was pressed in favour of Congress candidate, the vote was shown to be going to the BJP nominee.

Haryana registered 62 per cent voter turnout by 6 pm in the 90 assembly constituencies. As many as 1,169 candidates, including 105 women, are contesting the election. As many as 19,578 polling stations were set up beside the deployment of over 75,000 security personnel. Over 1.83 crore voters were eligible to vote that included 85 lakh women, over one lakh service voters and 252 transgenders.

A clash was reported from Nuh district in Mewat region where a woman was injured in the clash which took place between two groups outside a polling booth in Malaaka village, a senior police official said.

Nuh SP Sangeeta Kalia said some argument broke out between the present sarpanch and a former sarpanch after which some of their supporters accompanying them clashed and pelted each other with stones.

He said that when he objected to it, glass was hurled at him.

In an attempt to encourage women voters' participation in the polls, the Election Commission had set up pink polling booths, also called Sakhi booths with an all-women staff at many places.

Earlier in the morning, Prime Minister Narendra Modi, Chief Minister Khattar and former CM Hooda urged people to come out in large numbers to cast their vote and "enrich the festival of democracy".

Currently, the BJP has 48 members in the state assembly.

In the polls, Dushyant Chautala-led Jannayak Janta Party (JJP), a breakaway faction of the Indian National Lok Dal (INLD), is hoping for an improvement in its prospects following the debacle in the Lok Sabha election, in which Bharatiya Janata Party won all the 10 seats in the state.

The JJP had emerged on the scene following a feud in the Chautala clan in December last year.