Maharashtra: Is A Patch-Up Between Hindutva Allies BJP And Shiv Sena On The Cards?

Leaders of both, the BJP and the Shiv Sena, have made it amply clear that there might be differences between the two parties but they are not enemies. 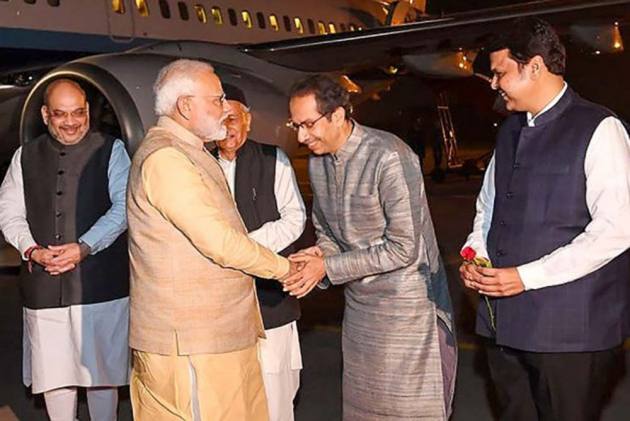 There seems to be a political realignment happening in the state of Maharashtra. With signals of a possible patch-up between natural Hindutva allies -- the BJP and the Shiv Sena, whiffs of insecurity appear to be rising from the Maha Vikas Aghadi (MVA) alliance.

Leaders of both, the BJP and the Shiv Sena, have made it amply clear that there might be differences between the two parties but they are not enemies. Shiv Sena leader Sanjay Raut has said that they are not like India-Pakistan. “We are like Aamir Khan and Kiran Rao. We may have parted ways but our friendship is intact,” Raut is reported to have said when asked about the remark made by former Maharashtra chief minister and BJP leader Devendra Fadnavis.

Fadnavis too had said that the two parties are not enemies and had fought Assembly elections as allies. “Decisions are taken according to the prevailing circumstances,” he said. The circumstances have certainly changed since the Shiv Sena, Nationalist Congress Party (NCP) and the Congress came together to form the government in the state after the pre-poll alliance between the two saffron parties fell through on the question of chief ministership.

NCP leader Sharad Pawar has emerged as the fulcrum of the attempts at Opposition unity to take on the electoral might of the BJP in 2024 Lok Sabha elections. It would help the BJP if it manages to wean the Shiv Sena away from the alliance in which NCP plays a major role. Also, sources in the Shiv Sena claim that chief minister Uddhav Thackeray is uncomfortable with the corruption charges faced by NCP leader Anil Deshmukh.

The Congress, being the junior most partner, is already smarting at what it sees as step-motherly treatment meted out to it. Party’s Maharashtra chief Nana Patole has already announced that the Congress will contest the next Assembly elections alone, and also that he is ready to be the CM face if the high command says so.

The speculations regarding a possible patch-up between the Shiv Sena and the BJP started with Thackeray’s one-to-one meeting with Prime Minister Narendra Modi on June 8. Raut too met BJP leader Ashish Shelar recently. There is also a buzz about the two allies of 25 years patching up in Maharashtra and Fadnavis coming to Delhi to join the central Cabinet where a reshuffle is long overdue.

However, there is a lot of distrust among the local Shiv Sena leadership that is preparing for the upcoming BMC (Brihanmumbai Municipal Corporation) and Thane civic polls. “We are going to fight the BJP in the elections and it is going to be ruthless from both the sides,” says a Shiv Sena leader.

Maharashtra BJP president Chandrakant Patil endorses the statement made by both Fadnavis and Raut. “Of course, we are not enemies but that doesn’t mean we are coming together to form the government in Maharashtra,” he tells Outlook. According to him, there are several leaders within the Shiv Sena who think that their party should get back with the BJP. In view of the uncertainties of politics, especially Maharashtra politics, Patil does not completely rule out the possibility of the two old allies coming together again. “If Thackeray wants, maybe the BJP leadership can consider it,” he adds.

Shiv Sena leader Arvind Sawant, who was a minister in the Modi cabinet till 2019, doesn’t believe there is a thaw between the two parties. It is not easy to overcome the trust deficit. “In the past two years, they have gone to the extent of raiding the family. During the Sushant Singh case, Aditya Thackeray was targeted. We can’t forget that,” he tells Outlook’s Preetha Nair.

Sawant also disapproves of the “blackmailing” by central agencies. “Now they are targeting Ajit Pawar. Weren’t they aware of the case when he was with the BJP,” he questions. Denying that there is any friction, he says the MVA alliance is stable – “difference of opinion is there but that is bound to happen in any alliance.” He admits that the two parties have a shared Hindutva ideology but adds that they are not slaves to it. “Hindutva is not their patent,” he says.

However, another Shiv Sena leader says that the future is full of possibilities and anything is possible, provided Thackeray continues to be the chief minister.