Taliye village under Mahad tehsil of Raigad district, has been one of the worst-affected villages due to landslides with NDRF recovering as many as 44 bodies from the area 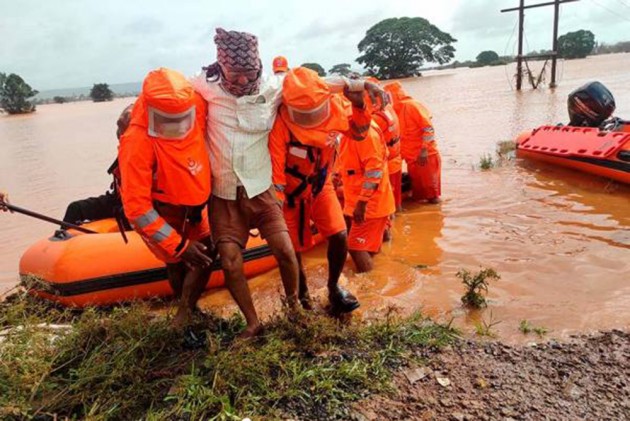 As the intensity of torrential rains reduced over Maharashtra on Saturday, security forces recovered 73 bodies from landslide-affected areas, the National Disaster Response Force (NDRF) said on Sunday adding that 47 people are still missing.

According to officials, as of Saturday night, 11 bodies were recovered from Ambeghar village after a landslide there, six from Mirgaon village and four from Dhokawale village.

Further, 41 bodies have been recovered at Taliye village in Raigad where a landslide struck on Thursday. Several others are still missing, Deputy Inspector General of Police (Konkan) Sanjay Mohite told PTI, earlier today.

Multiple teams of the NDRF and a column of the Army are carrying out rescue operations in the flood-hit areas across the state.

S N Pradhan, the Director General (DG) of the federal force, tweeted the latest data of its operations being undertaken in Raigad, Ratnagiri and Satara districts of the state. As per the data, NDRF rescuers have retrieved a total of 73 bodies from these areas with the highest number of 44 from the worst-hit Taliye village under Mahad tehsil of Raigad.

Forty-seven people have been reported missing in these three districts, as per the data posted at 12:19 pm on Twitter.

The force has deployed 34 teams for relief and rescue operations in the affected regions of Maharashtra.

As per state government figures updated till Saturday, the death toll from the torrential rains that battered Maharashtra's Pune and Konkan divisions, triggering landslides in some areas stands at 112, including 52 in the coastal Raigad district alone.

As many as 1,35,313 people have been shifted to safer places, including 78,111 in western Maharashtra's Sangli district, followed by 40,882 in Kolhapur district.

The Krishna river in Sangli and Panchganga in Kolhapur has been flooded. In Kolhapur, the rainfall activity ebbed and the water level of the Panchganga river at Rajaram weir came down to 52 feet, but it was still flowing above the danger mark of 43 feet, as per the district disaster cell.

Meanwhile, as people in flood-hit towns such as Chiplun, Khed and Mahad in Konkan struggled to come to terms with the disaster, the challenge before the administration is to restore water and electricity supply and arrange food and medicines in affected areas.