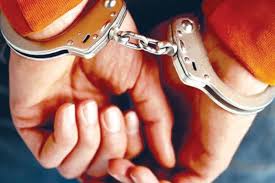 Police have detained a man for allegedly dancing with a sword in his hand at a birthday party in Maharashtra's Aurangabad city, an official said.

The incident took place on Saturday night following which the police registered a case against two men, he said.

During the birthday celebration organised by a person in Kiradpura area here, the two accused allegedly danced with a sword in their hands, the police official said in a release on Sunday.

After receiving information about the incident, a team from Jinsi police station went to the spot and detained one of the accused, a 19-year-old resident of Rehamaniya colony in Aurangabad, and also seized the sword, he said.

The other accused, aged 20, managed to escape, the official said.

The police have registered a case against the two accused under provisions of the Arms Act, he added.